Quite a rarity today as my local course Haydock Park was bathed in beautiful sunshine for this Bank Holiday weekend Saturday meeting which was the third day of the May Festival here and a decent crowd turned up which was very good due to racing also being held in the North and North West at Chester,Cartmel and York today also.

It was a marathon eight race card here on one of the signature big flat Saturday meetings at Haydock with the feature race being the Group Two Temple Stakes which was the first leg of the sprint division of the QIPCO British Champions Series over the flying 5f which attracted a good quality field of the speedsters.
Also it is worth noting that this meeting today had 23 non runners,many due to the state of the ground which changed from Good to Firm to Firm after race one.
2.10 The Betfred ‘Still Treble Odds’ Handicap 1m 4yo+ 66-80
A decent if trappy looking handicap on paper and certainly one that caused a bit of controversy.
First of all the race went to the 8yo Albaqaa who held on by a head in what was a busy day for judge Di Clark as a few photos were called for during the day, Classic Colouri was back in second but was in the eyes of many the winner had jockey David Begin (5) not dropped his hands after mistaking the 1/2 furlong pole as the winning line which meant losing the race with Albaqqa benefitting from the riders lapse in error.
I will happily go on record here and say I backed Classic Colouri so was very annoyed by what the jockey did but the thing with racing is you pay your money and take your chance with every race, the jockey got a 28 day ban for this so he will learn but people makes mistakes in life and lets face it if making mistakes was a sackable offence then everybody would be sacked after about an hour at work.
2.40 The Betfred TV Handicap 1m4f 3yo 86-100
Only five took part but plaudits must go to jockey Cathy Gannon here on her winning ride on Van Percy who came from an unlikely position with a furlong to go after being stuck behind long time leader Blue Wave to just get up on the line to deny him by a nose.
This was a good looking race on paper and so it proved to be, the winner has a good record in the north as his only other win was a 1m maiden at Carlisle and was beaten by Red Runaway who finished fourth back at Chester 15 days ago.
The winner will probably be aimed at Royal Ascot but will probably get further than the 1m4f trip and could be an ideal Melrose type while Blue Wave will be happier in smaller fields like this one today.
Cathy Gannon below with myself after getting her prize from the presentation.

3.15 The Betfred Silver Bowl 3yo Open Handicap
Five non runners made this just a 10 runner race but still a competitive race in what is always a good quality contest.
After being unlucky in the previous race it was much better fortunes for the Mark Johnston  yard as bottom weight Shebebi made all the running to hold off the challenge of the hat trick seeking Newstead Abbey and Mocenigo in a finish the handicapper would have been proud of.
Code of Honour who was well fancied was slow coming out of the stalls and was never really travelling but he is not one to write off and still has plenty to offer maybe on a surface with a bit of juice in it.
The winner will no doubt be sent to the Brittania at Royal Ascot in which he will have a fair shout in what is always a tough handicap over that straight mile.
3.50 The Betfred Temple Stakes 5f 3yo+ Group Two
Two former winners in Sole Power and Kingsgate Native plus top 2yo sprinter from 2012 Reckless Abandon were part of a star studded line up in this fast and furious contest which was the beginning of the sprint division of the British Champions Series.
It was former winner Kingsgate Native who took this on the stands side group of runners to deny Swiss Spirit who was finishing with a real rattle at the end under William Buick who missed the start but made up plenty of ground and only lost out by a neck with the highly regarded 3yo Reckless Abandon back in third and red hot favourite Sole Power back in fourth no doubt to the delight of the bookies.
Kingsgate Native has always been a quality horse but has struggled to hold his form at times and this showed as this win was his first in three years.
The second Swiss Spirit seems to have found improvement for John Gosden and could well be joining Sole Power in the Kings Stand on Day One at Royal Ascot where no doubt a good contingent of sprinters from the UK and all over the world will be having a go at picking some serious dough up.
Reckless Abandon ran a cracking race back in third for his first go at dining at the top table and it is highly likely he will end up in the Diamond Jubilee Stakes over 6f which will be his ideal trip in sprints and is one to keep an eye on.
4.20 The Betfred Mobile Lotto Handicap Div 1 6f 4yo+ 71-85
A local winner here for Eric Alston as Chester Arostocrat took the first division of this contest just by holding off the challenge of Saloomy by 0.5 lengths with Taurus Twins running a PB for 2013 who deserves a win but the handicapper needs to drop a few more pounds to do so.
The winner is a nice type and only 4 so can still improve off this although his rating of 74 will be going up very quickly.
Back in fifth was the well fancied Polar Venture who is better than this run but has much better form and has indeed done all his winning on the Polytrack at Lingfield.
4.55 The Betfred Mobile Lotto Handicap Div 2 6f 4yo+ 71-85
One for the bookies here as Bonnie Charlie won at odds of 33-1 to hold off the consistent Meandmyshadow by a short head with back in third the winner of this division as this race was split last year Mappin Time who ran a cracker off a 1lb lower mark than when winning this last year.
This was a typical northern sprint handicap with the usual whose turn is it today look to it.
5.30 The Betfred Mobile Casino Handicap 7f 4yo+ 76-90
A nice looking race here which went to Redvers from the Newmarket yard of Ed Vaughan on his second start of the season after running a credible fifth in the Victoria Cup at Ascot just two weeks ago, he met trouble in running but got out in time and booked himself a shot at the Royal Hunt Cup at the Royal Meeting should he get an entry for it.
Back in second was Zacynthus who has good form over 7f and could be aimed for the Carlisle Bell over 1m which could be tailor made for him with Al Muheer in third who stayed on well but still needs dropping a bit in the weights to get his win.
6.00 The Betfred ‘Bonus King Bingo’ Handicap 7f 3yo 81-95
Just the six in this and it was the first time hood which helped the Roger Charlton trained So Beloved get his first win of 2013 here to hold off Capo Rosso by 0.5 lengths.
Held up off the pace he got involved after 2f out and did the job well and will be even better when he goes up to 1m which will suit him even better.
The disappointment of the race was favourite Enobled who tried to follow up his recent Goodwood win but struggled to pick up when needed, he is not one to write off but will be better when upped to either 1m or 1m2f.
So a really good days racing at Haydock, the crowd where treated to some exciting races with tight finishes which kept the judge busy and earning her money.
After many months spent shivering at many jumps meetings with occasional trips to local football and rugby matches it was really nice to have the sun out and see racing in its more purer form on the flat.
Next week is the Epsom Derby but for me I shall be spending Saturday with the jumpers at Hexham where the first 3yo Hurdle of the season will be run then its back to Haydock the following week for the John O’Gaunt Stakes then we change turf for water with an afternoon at the Rowing World Cup at Eton Dorney a couple of weeks later.
Thank you for reading and please spread the word.
by Neil Watson

Just three meetings in the calendar are mixed and this is the second one of the year as the flat and jumping codes unite to give racing fans a real mix of flat,hurdle and steeplechasing  at its best, Seven races on today’s Haydock card with four flat,two hurdles and one chase for the punters to get stuck into.

Technically this was the first big race of the new jumps season and today’s card included horses that have won at Royal Ascot on the flat and at the Aintree and Punchestown festivals over the sticks.
Another bonus for me was a chance photo opportunity with trainer Emma Lavelle who was probably surprised when I asked her for a photo with her but happily obliged when I told her she was in esteemed company of other ladies I have been photographed with. 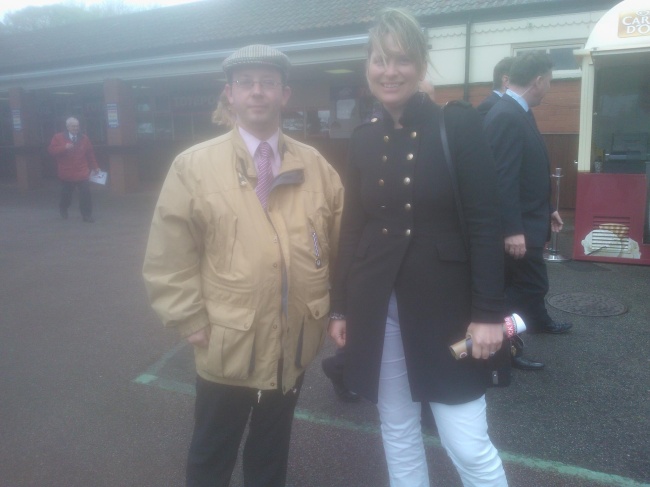 The first turf flat meeting of the year for me since my last one which was Ascot back in October on Champions Day when I saw Frankel for the only time in what was his last race before being retired and starting his new job of being a Stallion and from all reports he seems to have got the hang of it.