All eyes were on Cheltenham and Aintree this afternoon at a very cold and an even wetter Haydock for a seven race card which featured a real mix of Graded events,competitive handicaps and the annual Hunter Chase.

The weather it has to be said was awful for a lot of the afternoon,a mix of cold temperatures and driving rain made one question ones sanity about wanting to stand outside for four hours or so but National Hunt fans are a mixture of loyal and plain stupid for doing such a thing, after all why pay your entrance money to just stay in the bar watching it on the tv when you can just do that at home!

Big race wise it was the Grand National Trial,a race which a good few winners of the Aintree marathon have taken part in over the years without actually winning it, a couple of years ago Neptune Collonges ran a gallant and hearty second behind Giles Cross before finishing his career with National victory when he just pipped Sunnyhillboy by a flared nostril in one of the most titanic finishes to a National you will ever see, Suny Bay back in 1997 hacked up here then could only finish second behind Lord Gyllene in the now infamous “Monday” National.

So seven races on the card and due to the ground in all steeplechases the first fence down the back straight was omitted.

Some useful juveniles here on display which went to the Nick Williams trained Abracadabra Sivola who conjured up a bold display of front running under Sam Twiston Davies to just hold off the challenge from recent Wetherby scorer Aurore D’Estruval.

This was a huge improvement in form that the stewards noted and when asked the trainer pointed out the uncontested lead which he had, he is not in the Triumph but could end up at Aintree or Ayr, the runner up got some useful Black Type and is going the right way, The Green Ogre for Gary Moore is now qualified for handicaps, a few of these need a much better surface.

A few well know names in this but they all got promptly stuffed by the 6yo Seeyouatmidnight, a novice on only his third start under rules this ex pointer is clearly in good heart following his bumper win at Hexham at 66-1 then on his first start over timber at Musselburgh when 22-1, today he was 6-1 and like the first race he made all under Ryan Mania and stayed on very well up the run in to hold off the gallant and tough mare Mickie by 1.25 lengths to give her more Black Type for when she goes to the paddocks.

The big disappointment was from Celestial Halo who was having his first start since winning the Long Walk at Newbury, he travelled ok but struggled to pick up when needed, He could join Big Buck’s in the World Hurdle but it’s possible that the Aintree Hurdle then the French Champion Hurdle would be the main targets.

As for Seeyouatmidnight he has no entry at the Festival but will be bound for Aintree in either the Sefton Novices or Stayers Hurdle both over 3m110yds.

This was a brutal race to watch and coming back in up the run in it was like a return from the battlefield as weary mud splattered horses and jockeys had given their all in very testing conditions.

Venetia Williams continued her excellent run of form as last years Classic Chase winner and runner up in this race last year Rigadin De Beauchene eased to victory under Robert Dunne (3),travelling and jumping easily he cruised in the mud to beat stablemate and recent Ffos Las winner Emperor’s Choice by 10 lengths and Loch Ba who must have been getting tips from some of Mick Channons horses on how to quicken up did just that to sprout wings like Pegasus after the last fence to take third albeit 40 lengths behind the winner.

It was a very hard race with plenty casualties in it,down the back on the first lap Wellforth fell when prominent at the open ditch then on the last circuit Across The Bay went at the same fence,he was always struggling and will probably be roughed off now until Aintree.

Wychwoods Brook took a crashing fall when very tired at the third last,he really should have been pulled up as he clearly had enough,he didn’t look to stay the extra trip but is one to follow next season,it’s quite possible a race like the Becher Chase at Aintree and that Graduation Chase at Carlisle in November could be early targets, jockey Connor Ring (7) got a ten day ban

Red Rocco was another who took a tumble,he was fine too.

As for Rigadin De Beauchene he will not be going to Aintree but possibly Fairyhouse or most likely Ayr for the Scottish National.

A bold display of front running by Conor O’Farrell on the David Pipe trained Top Wood in the Lady Clarke colours landed the spoils here on his first start in 388 days.

Slick jumping here helped and he simply ground the opposition into submission although the only danger was from Astigos who battled on up the run in but could not gain the extra 1.5 lengths that separated first and second, he may not go for the final but will go chasing next season all being well and will be a useful recruit.

The big disappointment was from Flemenson the recent Wetherby scorer who ran very flat,he is only a 5yo so this can be forgotten about as I’m convinced that better is to come.

A race with a decent history behind it,two years ago the sadly missed combination of Brindisi Breeze and Campbell Gillies beat Harry Topper before winning the Albert Bartlett at the Fesitval.

The mare Toubeera gave Venetia Williams a second winner of the day here,held up early she took over after two out under Aidan Coleman to easily give a twelve length whacking to Kaki De La Pree who in turn was twenty five clear of favourite Oscar Rock.

Toubeera won’t be Cheltenham bound although there is a mares race at Doncaster in a fortnight which could be considered.

Six set off and only three came past the judges box at the end,the other three pulled up and of the ones that did finish they were separated by a total of 69 lengths.

It was A.P. who had an easy enough ride on Bobcatbilly who was already a winner here this season,he likes Haydock and could come back here on Easter Saturday,he jumped well and was allowed to run down the last two fences.

Sixty Something was staying on,he want a lot further than this.

Dungeel was pulled up halfway through,he was never happy while Gardefort can be more effective on an easier surface.

Current Exchange should be winning a Hunter soon,trained by Sheila Crow he could be going for the North West Point to Point final at Bangor in May.

Favourite Always Right is a tricky customer who could be costly to follow but wait till he runs in a Kelso Hunter before backing him.

As for Ockey he should go to Cheltenham or Aintree to chase the bonus prize after winning this, it’s fair to think that the members of his registered hunt the Vale Of Yore had a nice evening after this

Some tough racing this afternoon then at Haydock,the people in charge should be congratulated for getting the meeting on,it was very testing for horses and jockeys and thankfully all returned safe and sound.

This was National Hunt at its hardest and even most bravest,the weather may have been giving the UK a real battering and hammering but the racing roadshow continues in earnest,of course lots of people have suffered badly throughout all this and I send out huge sympathies and hope that they can get there lives back to some semblance of normality as quickly as they possibly can.

Next Saturday I hope to be at Newcastle for the Eider Chase but if the weather has a day then the afternoon BAGS at the local dog track will be the back up plan but if that’s the case I probably won’t blog that.

Below,Yours truly with the beautiful Gina Bryce off C4 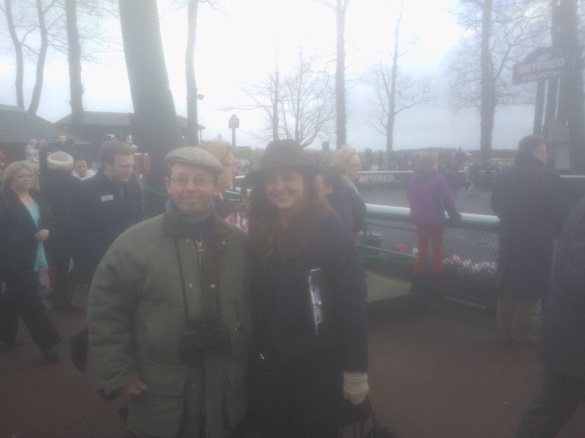 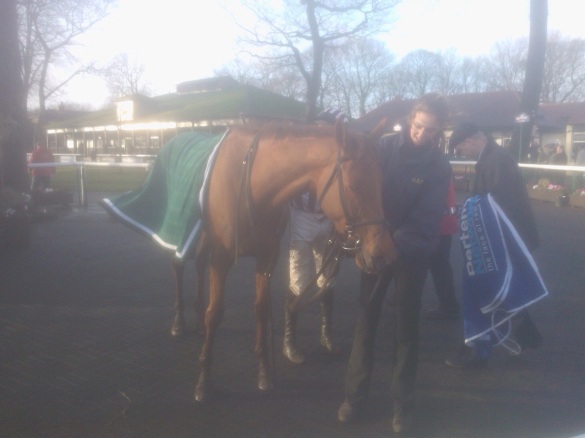 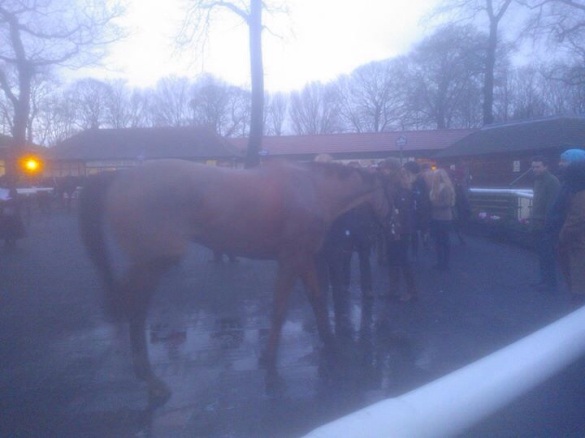