“Ladies” Day at Aintree which meant the usual sights of fake tan,unflattering outfits and odd looking shoes of various height on the second day of this three day festival.

Seven races with the feature race being the Grade One Melling Chase over 2m4f although this years was not a vintage renewal plus the professional jockeys get a chance to get their eye in for tomorrow with the Topham over one circuit of the big greens.

Looking into some of the various media reports apparently their were a few celebrities here today,not that I would know as unfortunately I was in the minority of being here as a racing fan!

A good franking of festival form here with favourite Josses Hill obliging for Nicky Henderson and Barry Geraghty although he didn’t have an easy win with Sgt Reckless under AP for Mick Channon back in the runner up spot, both of these were second and fourth in the Supreme Novices and are useful horses indeed.

Josses Hill is a high quality horse and it will be interesting to see wether he goes for a crack at the big hurdles or gets sent chasing,he will jump a fence and remains a top prospect for next season.

Below,Josses Hill coming back in. 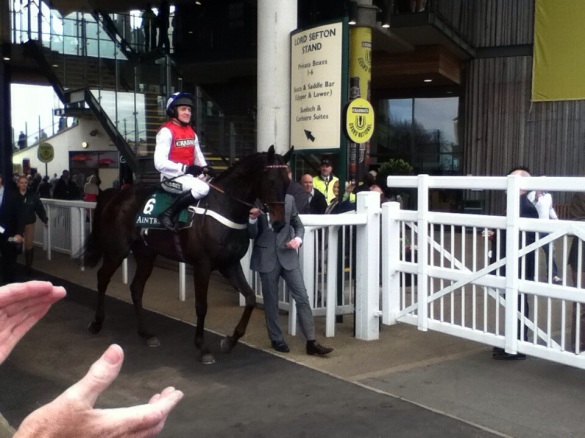 Only six but a more than useful looking Chase with two festival winners lining up.

The one everyone wanted to see follow up his win in the RSA was O’Faolains Boy but just like Haydock in January he showed that he has an aversion to the north west by running totally flat and couldn’t pick up.

It was Holywell who always prominent that took the prize,he jumped well and won his fourth on the bounce to hold off Irish raider Don Cossack who was staying on and gained a little bit of compensation after his tumble in the RSA.

This was a decent contest,Holywell is a horse I’ve always liked and he will be taking on the big three milers next term,I fully expect to see him in the Betfair Chase come November and with the staying Chase division being wide open he will end up in the Gold Cup, Don Cossack could end up at Punchestown and those nice staying races in Ireland will be his calling next year.

A Grade One in name but a really average renewal that was even worse when favourite Module got pulled out before the race.

It was wide open coming down the straight with a host of chances but this year it was going to Ireland who hadn’t won this since Hi Cloy back in 2006 with Boston Bob for trainer Willie Mullins, largely disappointing over fences this season he was sixth back at the festival in the Ryanair Chase but looked a lot better today and held off the challenge of Rolling Aces who ran a lot better since his flop at Ascot back in February.

Toner D’oudaires was keeping on and could be worth chancing over three miles later next season,he remains with potential for Gordon Elliott.

A wide open looking handicap with the maximum field of thirty runners over the big fences but galloping to the elbow it was one way traffic for the mare Ma Filleule who helped frank the form of Holywell’s festival win with a destructive performance over these big green monsters and could now be trained for the National next year much the same that her trainer Nicky Henderson has done with last years winner Triolo D’Alene.

Benny’s Mist was second and he was always prominent with Eastlake third but none of them could keep up with the winning mare who kept up a grand gallop to the line.

At time of writing their was plenty of fallers in the race so will make any changes if I find any news of anything but their were a few jockey changes later in the afternoon.

Lots of potential stayers as usual in this race which resulted in a bloodless success for Beat That who had not been seen since being a runner up over 2m4f in a Grade Two at Sandown, always travelling well he picked them off slowly and was going much the best over the last from long time leader Cole Harden and favourite the Rendlesham winner Seeyouatmidnight back in third who lost his unbeaten record under rules.

Capote under AP in the famous Trevor Hemmings colours stayed through beaten horses to take fourth and has the look of a potential National horse in the future as he looks like a battle hardened stayer.

Beat That will have plenty of options next season, the staying hurdle division could be worth a try if More Of That goes chasing and if they are not put off by At Fishers Cross but this was only his fifth career start and this 6yo looks full of potential for the future.

A lot of these ran in some of the big handicaps at the festival but the one oddity of this race is that the first four home all began with the letter C!

It was the much loved Aintree family of McCain who finally got a winner at this meeting with the 6yo Clondaw Kaempfer who had a real mother of all battles after the last with a three way battle from runner up Caid Du Berlais and Cash And Go who was staying on from the last flight.

Not a lot separated the front three at the end here with a finish that really makes the hairs on the back of your neck stand on end, It’s been a fairly quiet season for Donald McCain but this will be the ideal tonic for him and this horse should be starting next season in a nice little Chase around the likes of Bangor or Carlisle, the other McCain horse and favourite Stonebrook didn’t seem to stay the trip just yet,he could be ideal for the Swinton next month at Haydock should he get a nice weight.

A field of twenty went to post and they hacked along for the first mile and a half or so until turning for home when the field began to spread across the course which meant it looked like the finish of a 6f sprint contest than a bumper.

After a tricky season it was a more than welcome big festival win for Alan King’s stable with the 5yo Avispa who came into this race after a fair fourth in the EBF Mares race at Sandown last month but had to fight off the attentions of Lady Buttons who gained some useful black type for the Philip Kirby yard, Tara Mist who was second at Sandown came with a challenge but was outclassed here on the day.

Lots of useful potential here for the mares races next term, Avispa should jump a hurdle as should Tara Mist who is trained by Henry Daly so expect to see her pottering around Ludlow in October and November.

Two days of top class jumping done then,tomorrow it is the big one, Grand National day which I shall be spending at home after fighting May way through the once a year punters and explaining why Frankie Dettori won’t be riding in the race!

Like all true racing fans I hope all the horses and jockeys come home safe and sound,sometimes of course this doesn’t happen but having been at Aintree the last two days I can 1000% guarantee that the medical and veterinary care given to all the competitors is the best you will see on a racecourse.

As for the big one I think Long Run could go really well providing his jumping holds up,a former Gold Cup and dual King George winner yet he isn’t even top weight and two big EW ones that I like are Battle Group and Lion Na Bearnai

Next racing for me is next weekend when I’m off to Ayr for the Scottish Grand National which is always a good day out on the west coast of Scotland.

Enjoy the Grand National tomorrow and let’s all hope for a safe race.