Haydock Park was bathed in glorious sunshine for a top quality card with Pattern races mixed in with competitive handicaps for a seven race card.

The feature race was the Group Two Temple Stakes which for this year did not form part of the Sprint Series of the British Champions as the new Commonwealth Cup at Royal Ascot took its place.

Seven races then on a huge weekend of sport with something for everybody right across the board.

It was hats off to a Royal winner here as Fabricate gave The Queen a nice payout of £12,450 which will no doubt help by a nice christening present for Charlotte!

Held up early doors Fabricate made his move down the straight and took over with 2f under Adam Kirby and ran on well to beat Hernandoshideaway by 1.75 lengths, no doubt Royal Ascot beckons in either the King George V Hcap or possibly a step up in trip and go for the Queen’s Vase,he is a nice improving type.

Brian Eliison got a one-two here, Seamour led them home under the very useful Ben Curtis, making his handicap debut this unexposed 4yo has won over this trip over hurdles at Wetherby back over Christmas but it looks likely that a flat career will be his main form of employment,going in here of 85 he needs to go up a bit more to make the cut for the Plate but he has plenty to offer as a stayer.

Totalise was second and this was his best run over 2m but he is better over a bit shorter,last years runner up Nearly Caught came third and he is still held by the handicapper,Suegioo back in fourth ran much better than he did in the Chester Cup but still needs dropping a bit.

As usual plenty of improving types in this popular Haydock handicap, it was all about one horse here and that was last months impressive Sandown winner Mutarakez and he made it two from two this season as he got through to lead in the last 75yds to just get the better of Gorring by three parts of a length who in turn hung on by a neck from Carry On Deryck.

Mutarakez is continuing on the upgrade and the 10lb rise from his Sandown win didn’t make much difference,Next months Brittania at Ascot would be the obvious choice but he should be capable of holding his own in Pattern company and should also be worth trying over 1m2f as he looks more than capable of staying a bit further.

Gorring was making his handicap debut and hopefully the handicapper won’t overreact,he should pick something up soon.

One horse who disappointed was top weight Salateen who trailed in last,hard to explain why he flopped,maybe he will be better come the second half of the season but his St James’ Palace entry probably looks a little silly after this.

A competitive enough race for the grade which gave plenty of chances for gaining valuable black type.

The bookies gain here as 28-1 outsider Blhadawa under Luke Morris got the better of Interception and the 3yo Explosive Lady, sitting in the peleton she led over a furlong  out to WN by 0.75 lengths with the first time cheekpieces, it was her third career win and her first on turf, rated 10lb lower than the runner up it will be interesting to see if she can repeat this elsewhere.

Interception progressed well in handicaps last year as a 3yo,she could pick a nice prize somewhere,Explosive Lady was the only 3yo in this field and back in her own age she deserves something and looks to have trained on.

Gathering Power was in a far easier race than last weeks Duke Of York,she was over six lengths back in sixth,the ground may have been against her and would prefer a bit of juice in the ground.

Not part of Champions Series but to be fair this looked a pretty wide open renewal especially with Sole Power being absent.

Pearl Secret made the breakthrough at Group level but only just as Jack Dexter who had bad luck when challenging was coming with a real rattle at the finish and only went down by a neck, Wind Fire the 4yo filly was half a length behind to give her paddock value a bit more worth.

Pearl Secret had won a couple of Listed events and this 6yo entire will now head along with a fair few others here to the Kings Stand at Royal Ascot,doubtful he could follow up but the Nunthorpe and the Abbaye will also be on the target list.

Jack Dexter is a lot better over 6f but the stiff 5f at Ascot will suit him,expect to see him here in September.

Wind Fire can pick something up in the summer,Danzeno came fourth but could be better moving back up to 6f.

A usual wide open northern sprint here and David O’Meara (pronounced O Mara) continued his fine run of form as Danny Tudhope steered Eccleston to get the better of My Name Is Rio in which the first six home were covered by just over a length.

O’Meara who is adept at improving horses could eek a bit of improvement,Eccleston was dropped 3lb after his last race and got the extra furlong quite well,Ascot might not be his target but possibly one of the big sprints at Newcastle’s Plate Festival would be more realistic.

Panther Patrol fell as the race was warming up but came back after being attended to by the vets.

An impressive win for Amazour here on his handicap debut, he found trouble in running but Martin Harley managed to weave a passage and ran on with purpose,going in here off 89 this Ismail Mohammed trained 3yo has a more than useful future and could even get 1m in time.

Ticks The Boxes also tried 7f for the first time and reversed the positions from his Newmarket race when Navigate finished ahead of him when both finished down the field. 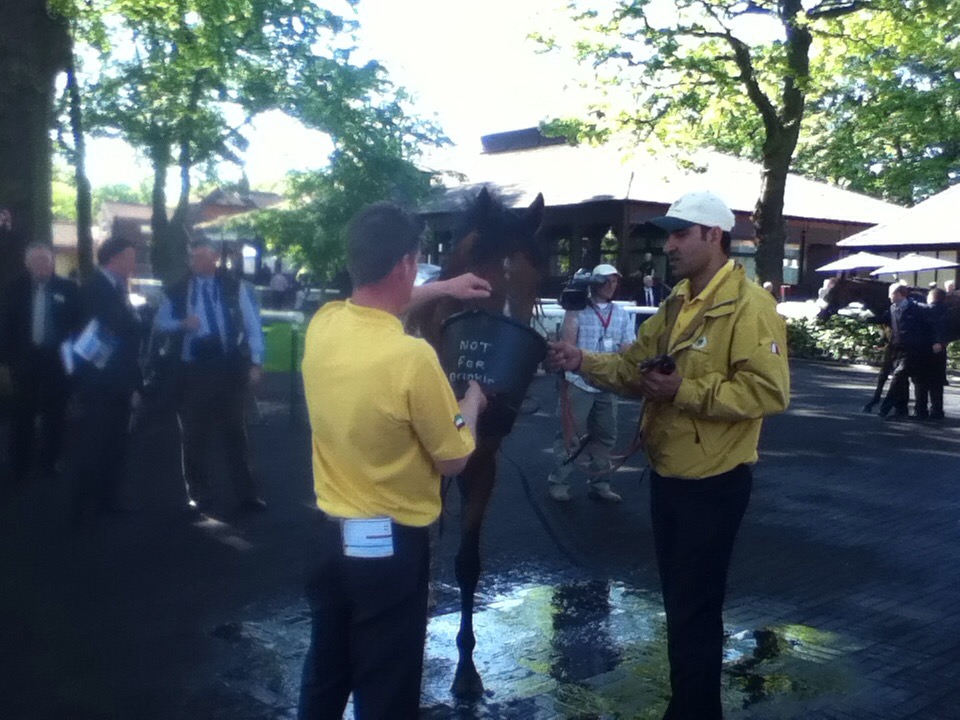 A well deserved drink for Amazour

A good days racing here at Haydock, back here again next Saturday with some good Group racing and tough handicaps to solve.