Betfair Chase Day on day two of the festival was met with glorious winter sunshine in conditions that were so much nicer and certainly a reward for those who braved Friday’s very testing conditions.

This afternoon saw the eleventh running of the Betfair Lancashire Chase with a small but select field of top class staying chasers.

Also on the card was some competitive handicaps and the Price Rush Hurdle for horses with Champion Hurdle aims.

Much nicer today than Friday

A fair looking race which Baby King finally began to repay the £130,000 shelled out on him as he got favourite backers off to a good start,despite having to fight off the attentions of Zaidiyn up the run in he kept on under Paddy Brennan to take the race by 0.75 lengths,the pair were seven ahead of De Boitron back in third.

Baby King is finally going the right way over hurdles although depending on what the reaction is off his mark of 123 here he should offer more,Zaidiyn ran much better than his previous two runs which included a fall over fences and a spin at Chelmsford on the sand.

This was a real stamina test and Venetia Williams will have an excellent chance of recording back to back Welsh Nationals as last years victor Emperor’s Choice who was runner up in this last season went one better as he battled on under Aidan Coleman on this triple National winning horse (Welsh,West Wales and Surrey)

The early pace was set solid by Harry The Viking and King Of The Wolds with the former jumping for fun, coming to three out though fatigue set in for Wolds and he got headed and found no extra,Emperor’s Choice lead with two to jump and had to work hard and fought off the attentions of Lackamon to score by 1.75 lengths

Emperor’s Choice will next be Chepstow bound,he won that off 131 and went in here off 135,he loves the mud and could come back here in February for the National Trial,wether he goes to Aintree is another thing though, Lackamon gave his all and ran with credit.

Rock The Kasbah followed up from his recent runner up spot at Chepstow last month as he hacked up under Tom O’Brien and won looking like a horse possibly a little bit ahead of the handicapper.

Vendor from Sue Smith’s cut the early running out but faded after being passed by the peloton at the last flight and faded down the field, Rock The Kasbah led over the last and drew away well, Aerlite Supreme stayed on into second spot with Stilletto boxing on into third

Rock The Kasbah is a horse on the up,expect races like the Relkeel or the Lanzarotte to feature,he should be even better when he goes chasing. 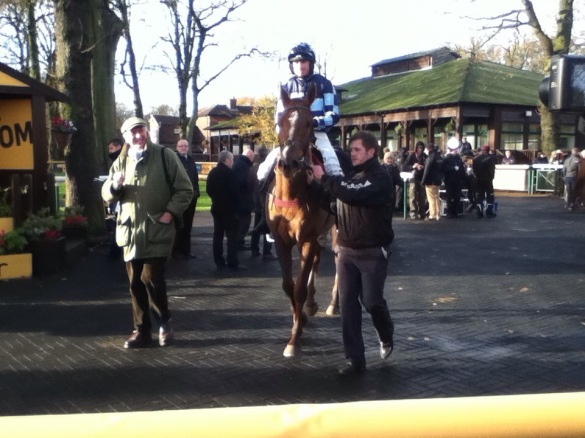 Only the four which saw Irving follow up his recent Wincanton win but it wasn’t easy as he had to fight off the attentions of last seasons Triumph runner up and Victor Ludorum winner Top Notch.

Irving has plenty of talent but struggled in the second half of last season,it’s possible the Fighting Fifth next weekend could be next unless the Bula or Christmas Hurdle are on the radar, Top Notch ran a credible race in his first race in open company.

A competitive renewal of this unique race which was run at a solid gallop from the outset.

Baradari opened his account for the Skelton team here,always travelling well he  and runner up Definitly Red went past long time leaders Closing Ceremony and Yala Enki as they came to the third last,over two out Baradari began to pull away and had the race firmly in the bag from Definitly Red who heat on but could not bridge the gap,Batavir and Alcala were behind in third and fourth place.

Baradari had won a valuable Ascot race in January over 2m3f and he stayed the extra trip really well,only a 5yo he will be having more good days and was only 2lb higher than his Ascot win,he may go for a Pertemps qualifier unless he has a go at the big staying races such as the Rendlesham here in February.

Definitly Red took the big Grade 2 Novice race here in February,he has a big race in him,Batavir may do better down in trip,Alcala will have learnt plenty here but a less competitive race will suit him better.

Cue Card was the ace here in the first Grade One of the season as he made Silviniaco Conti look very one paced in a high quality renewal and a crack at the £1,000,000 bonus.

Only five may have gone to post,sadly with no horses from Ireland but it was an enthralling race from flag fall

Conti went to the front under Noel Fehily and was very economical with his jumping,Cue Card and Dynaste kept each other company in behind while Holywell and Ballynagour were always behind.

With 9f left Cue Card began to put it up to Conti and these two very much had the race to themselves,Conti began to try and move on around the final turn but was starting to be niggled on after jumping four out then Cue Card went up his inner at the final ditch and was in cruise control as Paddy Brennan had an easy stroll home to get a second Betfair Chase.

Cue Card is back with a bang this season and now heads off to Kempton on Boxing Day,despite being a course he has never really acted on he will have a lot of followers.

Silviniaco Conti was well and truly stuffed here,Paul Nicholls did say that he could sport some headgear next,it could be that maybe he has peaked as a chaser,Kempton will be the real telling point as to wether that is true or not, Dynaste simply has never really stayed 3m at this level,he would be ideal for the Peterborough Chase next month.

Holywell is a spring horse but ran with credit,Ballynagour never figured

David Pipe looks to have a good one here as 6yo Vieux Lion Rouge stayed the extra trip here on his handicap debut after winning a couple of novice chases in the summer and made a mockery of his mark of 139 finishing four lengths ahead of Sun Cloud and No Planning.

The winner was held up early doors and got the lead with three to jump,from then he just had to keep up to his work,Sun Cloud who got hampered after Straidnahan fallen at the final ditch stayed on well but could not bridge the gap,No Planning and Indian Castle came third and fourth

Vieux Lion Rouge could return to Haydock for the Tommy Whittle and Peter Marsh,he is a horse on the up and loves heavy,Sun Cloud needs dropping a few pounds but ran well here.

Going out into the country

Two days of top class racing all done here and we have seen some fine horses in very tough conditions.

Next racing review may be the Becher Chase but with the weather you can never be sure.

Stilletto,3rd in the third race should offer more soon

Straidnahanna,fell when going well in the last