Heavy ground at Haydock for this competitive seven race card as the roads to Cheltenham and Aintree came here this afternoon with some nice horses on show.

The snow which covered the area on Sunday had vanished and despite a few splashes of the wet stuff during the week is was never going to be enough to threaten today’s action.

Four Grade Two races including some tricky handicaps and novice races formed the card with the Champion Hurdle Trial and Peter Marsh being the feature races.

Baywing got the four timer up but he had to work for it,coming in off a decent pace he led between the final two flights and fought on to easily hold Goodbye Dancer by 5 lengths who in turn stayed on through beaten horses by getting ahead of Shades Of Midnight by three parts of a length, Island Heights who won here in November did led over three out but weakened and came fourth.

Baywing has improved so much when we saw him win at Carlisle in November off 89 and took this off 125,next months Pertemps qualifier here looks likely unless connections fancy a step up in grade to the Rendlesham and he will make a useful chaser should he do that next season.

Coming in for the first

Bristol De Mai easily made it three from five this season with a bloodless victory here as he sauntered to a 32 length win ahead from nearest pursuer Amore Alato,he in turn finished ten ahead of the Venetia Williams duo Otago Trail and Zamdy Man.

This lovely looking grey has clearly benefitted from the move up in distance and jumped very well here,The JLT at the festival is his most likely target but should connections want another run before hand then the Scilly Isles or the Pendil next month are the more probable options.

Amore Alto was outclassed here but is going the right way and now gets a mark after this,he is one to watch now handicapping, Otago Trail never went with any zest and his run at Chepstow a fortnight ago has clearly left a mark and Zamdy Man didn’t look to stay 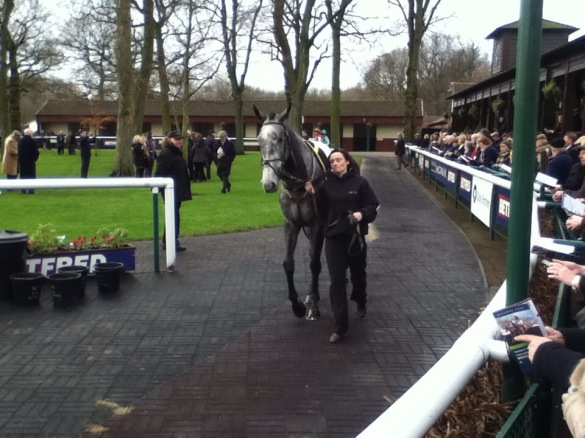 Just the six here but it did feature four last time out winners and plenty of potential on offer.

It paid to be up with the pace this afternoon and Harry Skelton utilised the stamina of last months course winner Its’afreebee and did exactly what Bridget Andrews did that chilly late December afternoon by making all but he didn’t have his own way though as Le Prezien and Vieux Lille gave chase coming down the straight, over two out Its’afreebee made a real hash of the flight and was stoked up by Harry Skelton as Le Prezien came after him and on the run in both gave everything and Its’afreebee just got the edge by three parts of a length.

Its’afreebee is a very smart type and loves to bowl along,he was very gutsy here and proved just as effective over 2m as he is over 2m3f, it’s doubtful the 2m or 2m5f novice events at Cheltenham will bring about another victory but he could be ideal for the Coral Cup or Martin Pipe hurdles, he does seem to love the north west so Aintree could be a better option.

Le Prezien just found one too good here but he is clearly a useful type and will be even better when he goes chasing, Vieux Lille ran with credit and he could better when moved back up in trip,possibly a race like the Sidney Banks will be up his street.

The New One got the job done here and heads off to the Champion Hurdle in a race which proved to be a little bit eventful.

Heading into the country early leader Rayvin Black tired to do a Drill Seargant and head for the stables and pull himself up,Tom Garner really had to work the double overtime as they went down the back.

The New One had to work for this and got the lead from Rayvin Black between the last two and despite holding a good lead he was asked to go and win his race which he did under Sam Twiston Davies, the win will have told us little that we already know but he will still need to find a lot more to win the Champion Hurdle where he was fifth last year.

Rayvin Black has only won right handed so the Imperial Cup in March looks the likely target before a visit to Punchestown and quite possibly Galway or Market Rasen should a summer campaign occur, Captain Conan back in fourth will strip fitter for this.

A more than useful renewal of this chase which has been gong since 1981.

Experience got the better over youth here as Cloudy Too who was left in the lead after Gas Line Boy took a tumble at the final fence down the back on the second circuit kept up the gallop under Danny Cook to record his first victory since the 2013 Rowland Meryck, Virak tried to give chase under Harry Cobden (7) but he couldn’t make up the ground, Hennessy fourth Fingal Bay kept on albeit one paced back in third spot.

This race took no prisoners and if anything Gas Line Boy was still travelling with real zest until he went, Cloudy Too had Virak behind him but he was never going to have him go by up the straight and found more to score 15 lengths ahead of him,Virak easily held Fingal Bay and Seventh Sky with Reve De Sivola and Third Intention the only others to get round.

Cloudy Too deserved to win a big one after finding life a bit to tough the past couple of years, from here it’s hard to know where next,possibly the National trial here next month should he get an Aintree entry unless a crack at the Scottish one.

Virak ran a game race in defeat,only a 7yo he has plenty of experience as a chaser but needs dropping a bit, Fingal Bay is probably paying for his PB in the Hennessy at the moment,Seventh Sky will be better when sent for the Topham and Reve De Sivola never looked like landing a blow

A competitive enough contest which saw Ubaltique bounce back to form under Aidan Coleman for Donald McCain, given a nice hold up ride he made ground up when moved up the inside when the field turned for home and he kept on gamely to score six lengths ahead of Goohar in second place

Ubaltique regained the winning thread since scoring at Ayr last year,this is his level and he deserved a day in the sun,Goohar hasn’t won since winning a bumper here in 2014,despite always giving his all he seems to find one too good,a step up in trip might help.

Amazingly Paddy Brennan only had one ride here and it was a winning one on Bun Doran who made all and was eased in the closing stages as the light faded at Haydock,coming home six lengths ahead of Vintage Clouds who was 36 ahead of Baratineur in third place.

Lots to like here about this horse who had clearly learnt a lot from his hurdling debut at Newbury in November,he is clearly going the right way and one to keep on your side, Vintage Clouds was giving the winning horse 6lb here so he ran to the best of his form,Baratineur never looked likely to land a blow.

As for the winner he may end up Sidney Banks bound but like the runner up his future will lie over fences.

Light fades in the last

An intriguing afternoon of racing,wether we have seen any Cheltenham winners is one thing but it’s the time of year when the possible is still possible.

Racing wise the next planned meeting is the Towton at Wetherby but before that we are in the hands of the weather gods.

Gas Line Boy,10yo was going very well in the Peter Marsh,could be getting laid out for the National

High Hopper,6yo was a fair way back in the fixed brush hurdle but will be seen in a better light when handicapping
Until next time,Goodbye