Very gruelling conditions face the runners this afternoon on very heavy ground at a very wet and sometimes gloomy Haydock as horses with Cheltenham and Aintree aspirations faced their mock exam before the big ones in the spring.

It proved to be a very emotional kind of day for various reasons here with racing run in very testing conditions.

The big race was the Grand National trial with a very competitive supporting card and in the week which saw the weights get unveiled,a few were putting their credentials to the test.

Named after the much highly respected journalist and always resplendent in his red scarf no matter which course or whatever the time of year,this race was named in memory of Ray Gilpin who listed Haydock as one of his favourite courses.

A tight finish here in a tactical race which saw 1-4f Fixe Le Kap get overturned by 4-1 second favourite Frodon.

Both of these were up at the front with the favourite making all until they came into the straight, Frodon made his move slowly under Sean Bowen and led over the last flight and began to find plenty on the run in, Fixe Le Kap had to fight off Messire Des Obeaux for second place and did that but just couldn’t bridge the gap back to the winner.

These two may head to the Triumph in what will be a typical wide open affair,Messire Des Obeaux  was making his first start in Britain and should improve for this run. 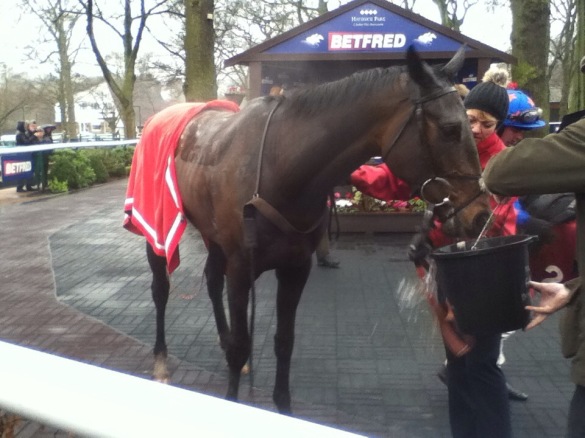 Frodon having a well earned drink

A fair quality renewal of the Rendlesham with horses rated in between 142 and 160.

Reve De Sivola bounced back from a poor showing in last months Peter Marsh as he reverted to his old self here by making all under Richard Johnson he gamely four off the attentions of young whippersnapper One Track Mind by 0.75 lengths.

Despite having to be cajoled along from four out with Deputy Dan putting it up to him around the turn he found extra and began to pull away, One Track Mind went with him after two out which Deputy Dan clattered and he began to fade, on the run in Reve De Sivola had to really work for this and One Track Mind was closing but the line came in time, the pair finished well clear of Silsol and At Fishers Cross.

Much better here from Reve De Sivola,hurdles has always suited him and been a fine servant over the years,He will probably have a go at Cheltenham but this was probably his day today, One Track Mind is a horse with a future in this division who could go to Aintree or Punchestown.

Silsol ran much better than at Warwick last time out,Aintree would suit him more than Cheltenham while At Fishers Cross still finds life hard.

Sadly Deputy Dan collapsed past the line and died,Condolences to all involved.

A real slog in the mud here, Eight brave warriors set out on their quest to Aintree but only three completed in what was a real war of attrition.

Kerry Lee bagged another long distance chase here as Bishops Road who was put up a stone for winning at Sandown last month found the extra weight no problem as he battled through the slop after being left in front off the home turn, the only danger was Broadway Buffalo who was slowly making inroads but flattened out with a couple to jump and could do no more and was clear of the only other finisher Cloudy Too.

Bishops Road  needs over twenty to come out to get in the Aintree race,only 8 it might be better to go to Fairyhouse or Ayr for now, Broadway Buffalo ran a game race in defeat under Katie Walsh and Cloudy Too found the extra trip too far.

Welsh National winner Mountainous never got going and the hard race effect that that race  has on a horse showed,Rigadin De Beauchenne faded when he got overtook, 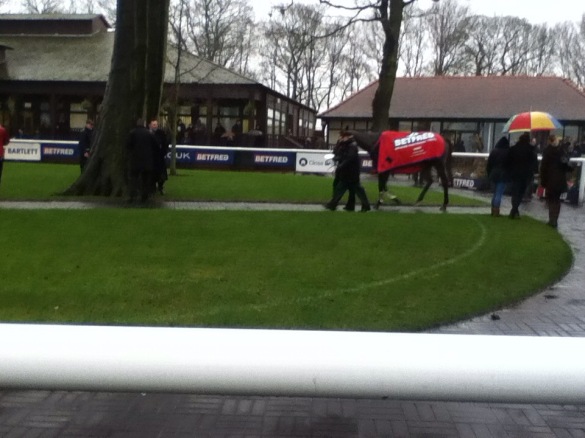 Bookies were dancing in the rain here as 33-1 outsider Mr Moonshine at the ripe old age of 12 thrashed fellow 12yo Quel Elite by 12 lengths.

Mr Moonshine had been pulled up in his final three starts last season but revelled in the mud here as he led after the last flight down the back and pulled away easily,he probably won’t go for the final,Quel Elite has been consistent and ran well in defeat but still needs dropping to a winnable mark, Isaacstown Lad in third spot gave his all here and is still having a good season.

Favourite Woodford Island was never gong here but is clearly better than this run.

Huge plaudits for Jamie Moore as he kept Kylemore Lough on terra firmer although more heavier than firmer to be honest.

Kylemore Lough made nearly all here and jumped effitinatly,leading nicely from the mare Kayfleur in second he blundered badly at two out but Jamie Moore kept himself in the plate and gathered his mount back together before forging ahead to win by five lengths.

The winner was upped only two pounds for winning at Exeter in December and will probably bypass the Biritish festivals and head to Ireland,he should get three miles in time,Kayfleur ran an honest race in defeat and should get a win before long. 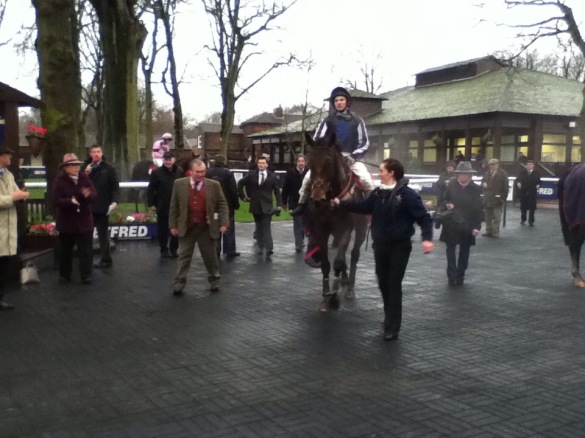 Another one for the ladies here with the Rose Dobbin trained Jonniesofa getting the better of Vintage Clouds by three lengths as the pair finished four ahead of 10/11f Duke Des Champs in third.

Jonniesofa had picked up a couple of novice hurdles over 2m6f at Newcaslte and Kelso this term,beaten over half a mile further at Catterick on New Years Day he benefitted the drop back in trip and should have a crack at the Albert Bartlett at the festival before going chasing next term, Vintage Clouds back in second has ran all his races here this term from 2m to 2m7f,he will go chasing next season and is a bright prospect.

Duke Des Champs was taken wide throughout,he ran well in defeat but his error at the last cost him,maybe the Coral Cup or Martin Pipe race will suit.

The song “The Days Of Pearly Spencer” could be renamed after the evergreen 13yo Pearlysteps as he put in a clear round of jumping under Miss J.C. Williams (3) to comprehensively wallop the only other finisher in this total slogfest Ace High by 85 lengths with the other five horses all pulling up.

Still a useful type he missed Cheltenham and Aintree but came third behind last seasons Hunter Chase Triple Crown winner On The Fringe, Ace High won over 3m6f at Cocklebarrow last month,a return to easier ground will suit him.

Hunters in front of the punters

Some tough racing in testing conditions and only the brave got round today.

It’s doubtful the National trial will bring a winner come April but full plaudits to Kerry Lee who is clearly going places as a trainer.

Just the one today.

Messire Des Obeaux,4yo came third in the opener and could be useful when sent handicapping.
Next weekend is a potential double header,Sunday it’s the second day of The British Indoor Athletics Champs in Sheffield and I hope to complement this with some local football