Local pop group Duran Duran sang about Rio in the 1980s but here at the Alexandra Stadium just north of Birmingham City Centre the cream of British athletes turned out for the final day of competition in the British Championships for the elusive title of being British Champion and for a spot on that all important plane to Rio in August.

Super Sunday as it was rightly billed contained a real mix of events and something for everyone who loves track and field.

Adam Gemili and Dina Asher-Smith both took the main events of the day in the Men’s and Women’s 200m but it was right to the wire in both races,Gemili just held off Danny Talbot and Asher-Smith had to hold off the attentions of Desiree Henry, The pair run for Blackheath and Bromley and will be in the shake up come Rio winning in times of 20.44s and 23.11s 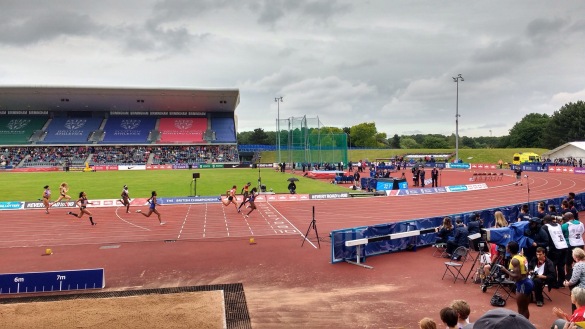 In the Men’s and Women’s 400m races Matthew Hudson-Smith took the prize in 44.86s beating Rabah Yousif Bkheir whilst Emily Diamond got the better over favourite Seren Bundy-Davies to a good reception from the crowds.

For many the feature middle distance race was the Women’s 1500m with a stellar line up of whose who.

As expected the race did go to form albeit for a few nervous opening laps as Jo Moultrie set a solid pace but got reeled back in as they approached the business end and then Laura Muir took over on the last lap and from then on it was race over as she injected some energy to win in 4.10.14 ahead of Laura Weightman in 4.11.76.

Charlie Grice had to overcome a bit of trouble in running in the Men’s race to claim victory,stuck behind three, Lee Emanuel,Tom Lancashire and Chris O’Hare on the last lap he seemed to give Lancashire a tiny push which resulted in him taking a tumble inside the last 300m,Jake Wightman tried to kick on but Grice had the measure of him to score in 3.43.41.

Shelayna Oskan-Clarke took a classy Women’s 800m race in 2.01.80s from Lynsey Sharp who she grinded down in the last 60m as Sharp began to run out of steam with Alison Leonard in third spot whilst the local club Birchfield Harriers celebrated as their very own Elliot Giles came over the top to take the Men’s version in 1.48.00s just shy of half a second ahead from Liverpool duo Jamie Webb and Michael Rimmer. 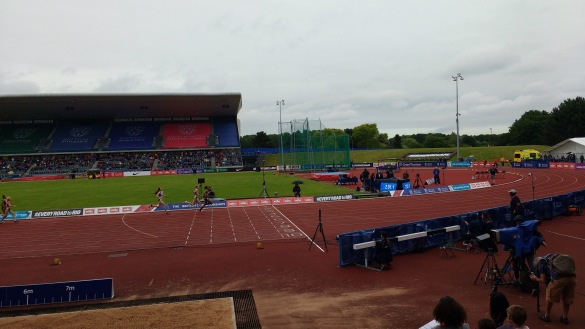 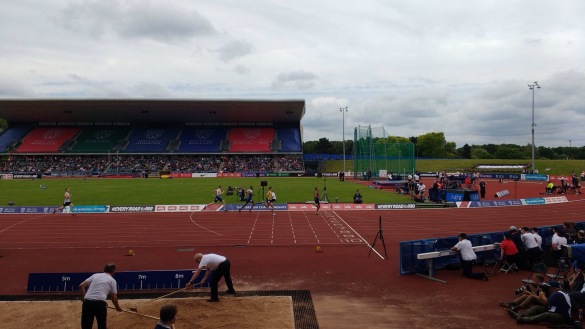 The day began with the Men’s and Women’s 5000m Walking races and just like the British Indoors in February both Bethan Davies and Tom Bosworth were the champions, Bosworth was second here behind Austrlia’s Dane Bird-Smith but as he was as only a guest it meant Tom won the gold medal.

Steph Twell took a big 21 runner field apart in the Women’s 5000m in 15.53.35s although Eilish McColgan pushed her right to the end as her career from steeplechaser to flat continues to bring about much improvement,she is certainly destined for bigger things. 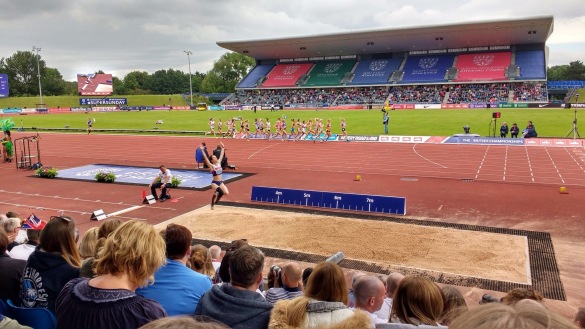 Rosie Clarke from Epsom & Ewell Harriers gave Lennie Waite a beating in the Women’s 3000m Steeplechase,both were always prominent and sharing the lead but Clarke had more left in the tank winning in 9.52.20s

The biggest one sided performance came from Eilidh Doyle in the Women’s 400m hurdles as she pulverised her field in 54.93s clear from Jessica Turner the runner up.

Seb Rodger came out on top in a tight Men’s race from Jack Green and Tom Burton,all three were covered by less than half a second with a winning time of 44.45s

In the Men’s 110m hurdles final after some quality heats the title went to Andrew Pozzi in 13.31s ahead of Lawrence Clarke

Jade Lally won the Women’s Discus as her final throw of 59.25m proved to be the winning one over three meters ahead of Eden Francis’ fifth round throw of 56.24.

Luke Cutts easily had the Men’s Pole Vault with his third attempt at 5.40m being 15cm clear of joint runners up Steven Lewis and Jax Thoirs

A fascinating Women’s Javelin saw Joanna Blair’s second round throw of 57.44m being the winning throw,Goldie Sayers came second with 54.98m but she wasn’t helped by getting three fouls

The Men’s Long Jump was effectively won in the first round by Daniel Gardner with 7.67m being the best but he just held on as Ifeanyi Otuonye got 7.66m on his fifth throw before red flagging in the last round,sadly it wasn’t to be for Chris Tomlinson on his final day of competition but he came a respectable fifth place.

Robbie Grabarz won the Men’s High Jump on count back in 2.26m,the same as Sale’s Chris Baker but by one less attempt.

Rachel Wallander secured the Women’s Shot Put in round four as her 16.67m throw was never caught,Sophie McKinna got closest on her last throw with 16.16m which secured her the runners up spot.

In the Men’s Hammer 75.67m proved to be enough for Shaftesbury’s Chris Bennett,he was one of only two athletes in this twelve runner field to have a 100% completion record with every throw.

Finally in a nice looking Women’s Long Jump the ever popular Jazmin Sawyers wowed the crowd with her winning leap of 6.75 metres,ten centimetres ahead of Shara Proctor,also in the field was Paralympian Stef Reid, the F44 athlete came last with 5.43m but it was her seasonal best and will have been a good stepping stone for the Paralympics as this jump back in her own company would easily be a winning one. 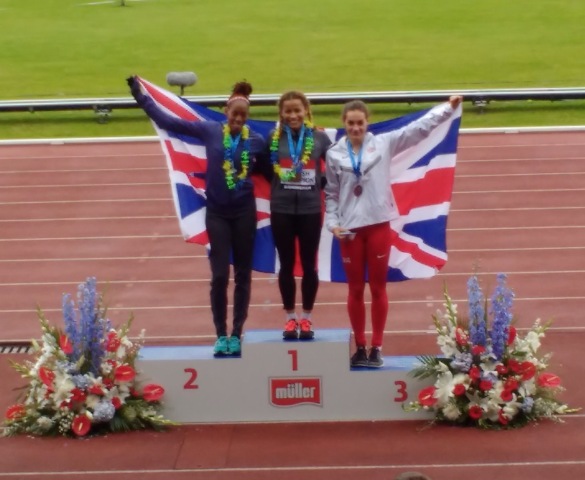 So the Road to Rio is in full swing,some top quality athletics today enjoyed by an appreciative crowd,whoever gets selected will have the full support of the fans from TeamGB.

Next up on here we switch to four legs for the Lancashire Oaks on Saturday,of course with the weather being all sorts it’s a case of fingers crossed!

Performance of the day from here goes to Laura Muir in the Women’s 1500m,a fine turn of foot when it mattered obliterated a top quality field.

A hearty crowd turned up on Saturday evening to Lingfield Park just twenty miles or so away from the hustle and bustle of Epsom Downs for a seven race card which despite lacking any star performers still made for a tricky card for punters to solve.

It was also Countryside Day here,sometimes these types of meetings are normally associated with the winter game but this meeting is a regular one in the courses fixture highlights.

Seven races then and despite not being the highest quality card we were treated to some nice finishes on a lovely evening in Surrey. 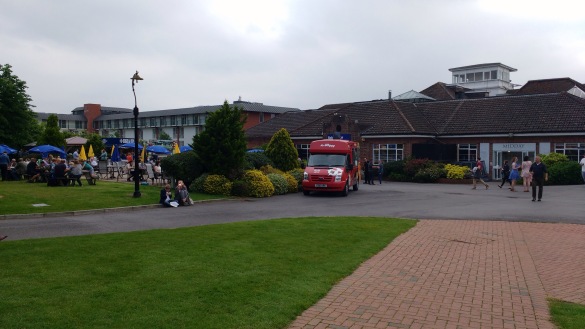 City Ground made all here for Serena Brotherton on his first start for Mick Appleby since leaving Mick Easterby’s stable, drawn ideally in stall one right up the inner he took this comfortably and could offer a bit more even at the age of 9, Engai back in second stayed on well enough.

A competitive 3yo race for the grade here which resulted in a tidy win for Frozen Force for Kieran Shoemark and Amanda Perret, he had to be driven right out but he looked to thrive on it as he did the extra two furlongs and could offer much more at this trip

0.75 lengths back in second was Mighty Lady who appreciated the return to the Polytrack,Mayasa back in third tried to make all but did keep on after being swallowed up. 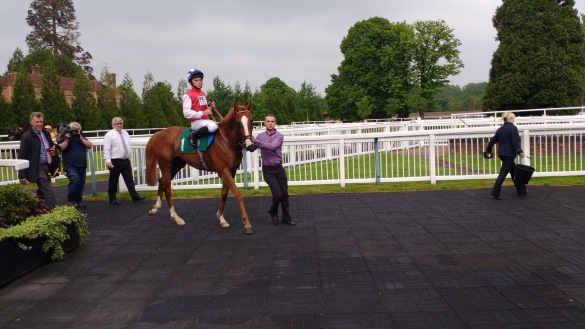 Not a race to take the winning form on trust,this was a shockingly poor contest but one in which a winner had to be found.

Catharina brushed the opposition aside very readily here,held up under Renato Souza she led with 2f to go and didn’t look like she was stopping for the Dean Ivory yard,this was half a mile further than she has raced before and it could be the making of her, The stable second string Spinning Rose came second but was six lengths down with back in third Foylesideview who kept on.

Experience came to the fore in a fair juvenile race for the grade as Simmie learnt plenty from her debut run at Chepstow under young Ed Greatrex,leading in the last furlong she was all out to hold off Kody Ridge who rallied towards the end by a short head and gave trainer Sylvester Kirk like Dean Ivory a winner at both Epsom and Lingfield,she could make up into a fair handicapper

This evenings feature race and a fair contest with the usual mixed bag of improves and horses needing respite from the handicapper.

A tidy piece of riding by John Fahy here on Cool Bahamian who made late headway with 2f out and came out on top in the last half furlong,this was a pound below his last winning mark,he was third in last seasons Jockey Club Grassroots Sprint Final and that could be his target, Justice First back in second should find a race somewhere,Silver Rainbow back in third needed the run and can pick something up. 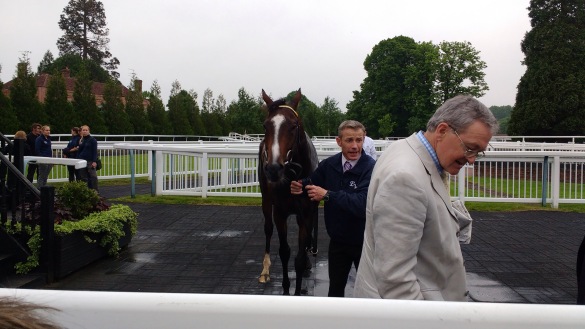 Something of a surprise here as 20-1 outsider Cliffhanger easily got the upper hoof of odds on favourite Aflame, at the back of the pace she picks her way through the field and led past Aflame in the last furlong to score by 1.75 lengths.

Plenty to like about the winner,she now qualifies for handicaps and looks like she will get a mile too,Aflame was dropping back in trip after her debut run over 1m,debutant Andanotherone was back in third and will have learned a lot.

Experience triumphed over youth here with the two 7yo mares Pucon making all and giving Beau Mistral an easy five length beating,she in turn was 1.75 lengths ahead of Remember Me who was the first of the 3yo home.

Pucon loves Lingfield winning on both turf and the polytrack,this is her level,Beau Mistral benefitted from the drop back to 5f which the trip that she has won all her six races at 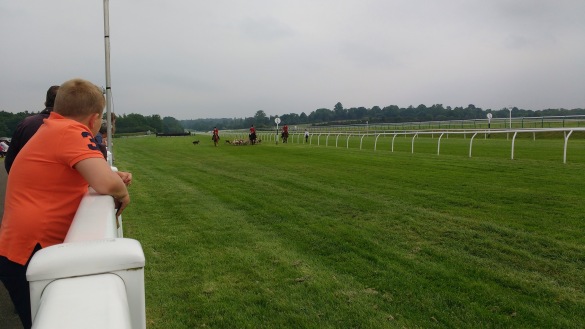 Shufoog,3yo filly trained by William Haggis,didn’t get the best of runs in the second race but has plenty to offer.

Time To Exceed,3yo filly trained by Henry Candy ran ok in the sixth race and will be better when she gets a mark after her next run.
Next up on here we go from four legs to two for athletics as Olympic places are up for grabs in Birmingham at the British Championships in a few weeks time,till then it’s time for a little break from what has been a real busy and hectic few months