The Knavesmire came out of its hibernation into a complete downpour for day one of its popular festival which is loved by racing professionals and fans alike.

Soft going was the order of the day with and full of Epsom,Chantilly and Royal Ascot clues abound on a top class first day of term back at York.

Wednesday’s big talking point was all about Shutter Speed who after being given the OK to run by trainer John Gosden in the Group 3 Tattersalls Musidora over 1m2f put in a gritty display under the evergreen Frankie Dettori to make it 3/3 and make the transiston to pattern company as she finished ahead of the once raced Vintage Folly, connections have said that the French Oaks would be the more likely target at Chantilly over the same distance but she did give the impression that 1m4f looks achievable too in time.

One filly who ran poor was the Jim Bolger trained Vociferous Marina who never picked up but given the tough conditions she can be forgiven.

The big sprint race of the afternoon came in the Group 2 Duke Of York Clipper Logistics Stakes over 6f, a cracking renewal which included the first three home in the Champion Sprint at Ascot last October but this year was all about Yorkshire born but Newmarket based William Haggas’ Tasleet showed them a clean pair of hooves as he used his speed to put them all under the kosh to run away very impressively, Tasleet only ran twice as a 3yo and he should be on his way to Royal Ascot next for the big 6f Group 1 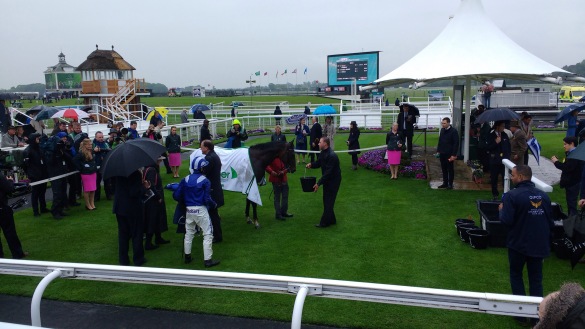 Rod Millman trained the seasonal opener a wide open 1m2f handicap as last years John Smiths Cup winner Master Carpenter streaked away in serious style under Phillip Makin, going in off 95 he was much lower than his win last July and a possible idea will be to comeback here to go for a repeat of last year,he loves York so expect this place to be visited a few times in the summer.

Yorkshire trainers dominated the big 6f handicap with over half the field hailing from the White Rose County and it proved to be so for trainer David O’Meara and Danny Tudhope who rode stable debutant Al Qahwa as he just edged out Muntadab into second place, formerly with Mick Halford he had some reasonable form but the drop into handicap company worked the oracle, landing this off 94 the handicapper will have his say.

William Haggis picked up another prize on the afternoon, teaming up with Ryan Moore they landed the 3yo 7f handicap with Battered who will certainly have bigger fish to fry this season after a very dominant display, only his second start over this trip he looks much more at home and could even get a mile in time.

Brocklesby form came to the fore in a reasonably nice looking 5f Novice race for 2yo, top horse Santry who had previously landed Div 1 of the race back in April made it 2/2 but he had to put in the overtime to get the prize for trainer Declan Carroll, hard to envisage where he will go to now, Royal Ascot might be a step too far so maybe the big 2yo race at Beverley would be more achievable.

Finally in the last race a competitive 1m4f handicap, Zain Arion led them home in a well strung out field over a length and a half clear from Purple Rock, not phased by the conditions this 77 rated 4yo filly as hit top form of late after a poor start to her racing career and for trainer John Butler he will be eyeing some black type very soon for this improving sort.

Good to see the Knavesmire back in action although the weather was more akin to the winter game than the summer one.

Next up is Haydock next Saturday for the Group 2 Temple Stakes over 5f, hopefully we will have much better weather too!