Saturday afternoon and for fans of the flat they were all gathered on the Town Moor for the last hurrah before singing a rendition of Auld Lang Syne as the turf flatseason came to its natural close to send them into their winter hibernation until the spring but for fans of the winter game things began just to crank up a gear and for yours truly it was off to Aintree again for Community Raceday which had a good mix of races for people to get their teeth into.

The afternoon proved to be a huge day in the career of promising young conditional jockey Mitchell Bastyan as he and his current five pound claim both came to good use as the Evan Williams trained 9yo landed the big 2m4f handicap chase at Aintree in some style seemingly coming from another county after being held up early doors he ran away very readily in the style of a horse seemingly back to his best, this was a very competitive looking race and On Tour has plenty of options it would seemingly appear with possible races the big December handicap at Cheltenham over 2m5f or possibly a return here for the Sefton over the famous green fences on the 9th of December.

On Tour having a welcome drink

The Skelton brothers Dan and Harry got the afternoon off to a perfect start when they landed the first two races on the card.

First up the dark blue jacket and cap of Sue Magnier passed the line in the opening 2m4f novice hurdle, now these colours are more likely to be spotted in plenty of races down the M53 at the Chester May Meeting but plenty jumpers have appeared too and Hear No Evil put in a fine professional display to win the race in nice style, placed in a couple of bumpers last season he looks like he will make a quality hurdler and is one to keep an eye on.

Dan and Harry quickly got the double up in the next race when Captain Chaos used his previous chasing experience to good stead to easily land the 3m1f novice chase, despite diving at the second fence he put in an exemplary round of jumping and this should boost his confidence for the rest of the season, a faller in last seasons Towton at Wetherby it’s been mentioned by Dan Skelton that he could be heading back up to Yorkshire next February to gain compensation, he is certainly one for the big long distance chases when upped in grade, the biggest disappointment came from favourite Geordie Des Champs who put in a poor round but deserves another go. 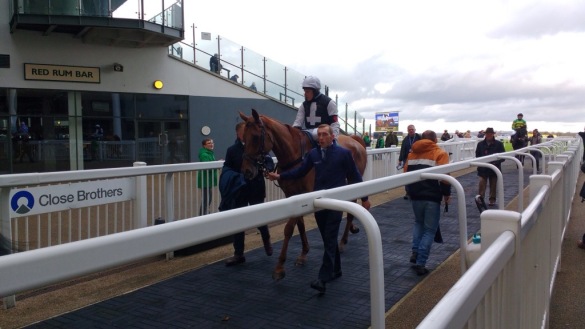 Just three turned out for the feature 2m4f hurdle which saw last seasons top staying hurdler Unknowhatimeanharry get some easy pickings under Barry Geraghty for trainer Harry Fry as he saw off the other two runners Value At Risk in second place and the third placed Top Notch, this will set him up nicely for a return to Newbury in the Long Distance then all the other big staying hurdle races before trying to go two places better in the stayers’ hurdle at the Cheltenham festival. 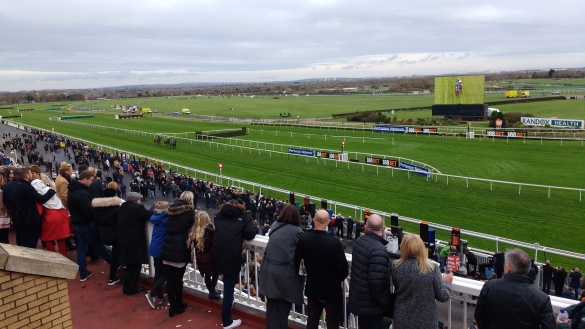 A circuit to go!

Louis’ Van Pouch cleaned up in the Pertemps Qualifier over 3m for the Hobbs and Johnson partnership, in what looked on paper a more than useful staying hurdle Louis’ Vac Pouch showed much improvement for the step up in trip after his seasonal reappearance at Chepstow over shorter and now looks to be going the right way, he asserted his authority over handicap debutant Forza Milan and no doubt will be aimed at the final come March.

Tom George left Aintree a very happy bunny after Baby King just got the nod in a photo for the 2m handicap chase ahead of Ut Majeur Aulmes, they didn’t go a helter skelter gallop like they normally do in the Red Rum Chase here in April but it was solid and he picked up nicely on the flat after the last fence to just pip his nose on the line.

Finally the concluding bumper which was run in ever fading light only had four in it due to two non runners before hand and then Wimpole bolting on his way down and looking more likely that a maiden over 7f would suit him more than 2m, in the end the famous green and yellow colours of Trevor Hemmings got into the winners enclosure as debutant Welsby who might possibly have been named after the former ITV football presenter Elton Welsby came away readily under Ned Curtis (5) for the inform Nicky Henderson stable, he has a nice look about him and will be even better when sent hurdling. 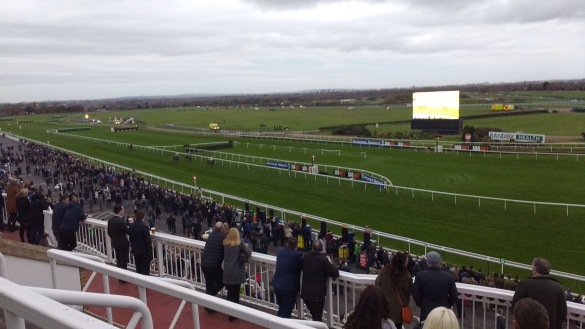 Forza Milan, 5yo trained by Jonjo O’Neill showed much improvement to be second in the Pertemps Qualifer and has a good future ahead of him, one to notice if he gets laid out for the final.

Spider’s Bite,5yo trained by Henry Daly was staying on third in the 2m 4f novice hurdle and looks like he will be even better when sent handicapping over 3m in the future.

Gardefort,8yo trained by Venetia Williams was in the process of running a career best in the feature 2m4f chase when making a real horlicks at the final ditch which cost him but he travelled well and providing the handicapper doesn’t overreact he has a big race in him this season.

Next up on here is the big Betfair Chase day at my local course Haydock in two weeks time and with the quality of runners entered already looking hot it could well be the race of the season!