It’s been a quiet season by Venetia Williams’ standards but the Hereford based trainer landed her second Grand National Trial win at Haydock with as expected the one horse who doesn’t hold an entry in the Aintree spectacular as Yala Enki demolished a high quality field in an incident packed staying chase over a gruelling 3m4f marathon trip handing National market leader and top weight Blaklion a 54 length drubbing.

The victor in last seasons Tommy Whittle he was always up in the van guard, to begin with Silsol fell at the first fence then coming up to half way Three Faces West tumbled at the 13th, in line for home only three had a chance which became two when Wild West Wind found the conditions too much and pulled himself up with legs of jelly at the second from home.

This left Yala Enki nicely ahead of Blaklion who could do no more as Yala Enki under Charlie Deutsch powered away, he doesn’t hold an Aintree entry and talk of Uttoxeter has been mentioned as he needs soft ground so the Midlands or Scottish ones will be under the microscope for now 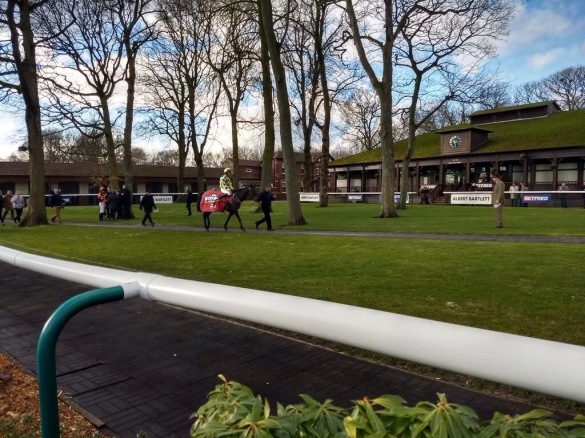 Blaklion in all fairness ran well but was giving nearly a stone to the next horse in the weights, he will be given a small break before getting ready for Aintree and he isn’t one to write off after this.

Fans of long distance hurdles had an unlimited buffet of them this afternoon with three races for punters to tackle.

First up Donna’s Diamond supplemented last months impressive handicap win when bolting up in the Grade 2 Rendlesham Hurdle, on the front end with Boite who took an unfortunate fall at the third from home which left him in front he battled on under Callum Bewley to fend off odds on favourite Agrapart who again failed to deliver in this race and No Hassle Hoff who himself had two extra jumps to contend with when leaping over Boite and his rider.

Donna’s Diamond needs soft ground but could pop down the East Lancs for a crack at the Liverpool Hurdle in April providing the going is soft, Agrapart isn’t entered at the Festival either and could be Aintree bound too. 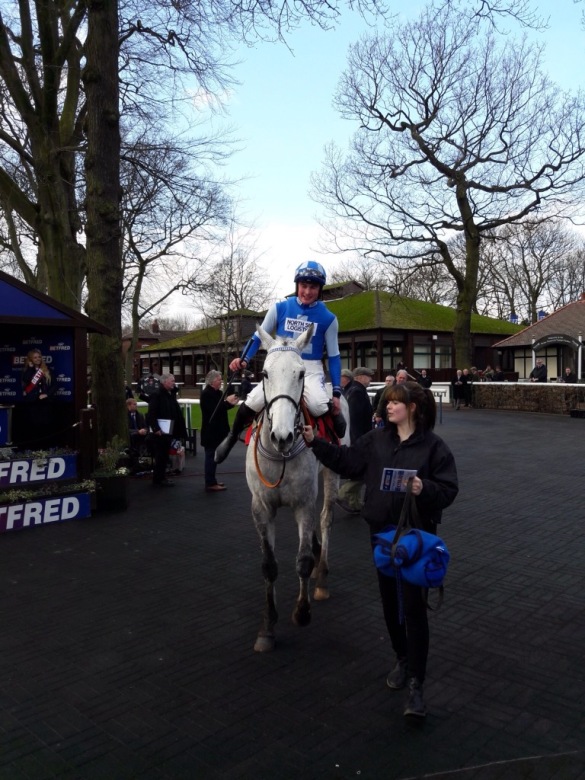 Nicky Hendeson has a useful sort in Chef Des Obeaux as he breezed home to take the Albert Bartlett, he got the lead exiting the back straight and kicked on to best a more than useful looking field, a chaser in the making for next season he will be involved in the finish of the Cheltenham Albert Bartlett, Uppertown Prince stayed on for second spot and will also be a decent type next season too. 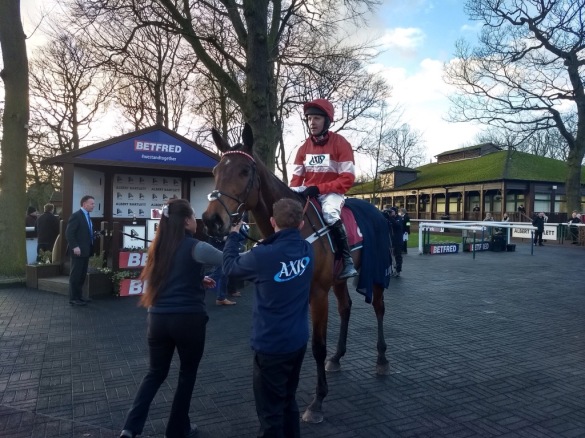 Bridget Andrews picked up a nice win for herself with the handicap debutant in Tommy Rapper who got the judges verdict in the Pertemps Qualifier, given a quiet hold up ride he picked them off slowly but surely and took the lead off the ever consistent Theo’s Charm on the run and just got up buy a neck, Dan Skelton may be swayed by the final at the Festival although with Bridget still being able to claim 3lb then the Martin Pipe might be under consideration too. 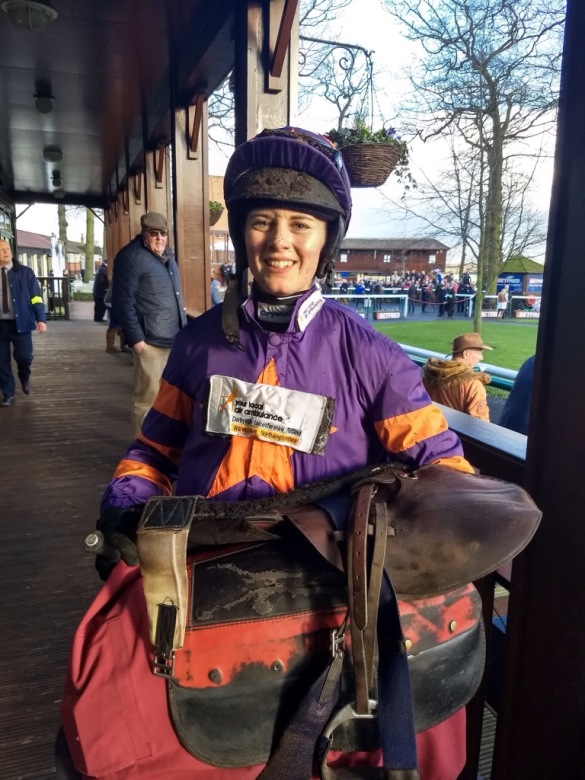 Sadly their was a bit of bad news to come from the race with the passing of Black Ivory who sadly made his way to the stable in the sky after being brought down at the fifth flight, Condolences to all at Ruth Jefferson’s stable.

The Victor Ludorum over 2m was one of three races that needed a photo to separate them and Turning Gold just edged out Cornerstone Lad in a real pulsating finish, a former flat horse with Sir Mark Prescott he his now trained by Nigel Twiston-Davies and had been placed in three starts over timber but finally got his first win over hurdles, The Fred Winter was touted.

Two other chases supplemented the card, First up just four set off in the 2m4f Novice Handicap Chase and only two got round with judge Nick Bostock again needing to get the magnifying glass out as Lake View Lad gave last months Altcar Novice Chase a boost by getting a short head verdict over Crievehill in a fine finish, Ayr might be under consideration now for the Nick Alexander trained winner for a 3m Novice Handicap or the Future Stars depending how things pan out.

Last of all Virak got himself qualified for the Cheltenham and Aintree Foxhunters by staying on hard to land the 2m6f Walrus Hunter Chase, The class horse of the race by far he could well be aimed at both for which Haydock put on a bonus prize. 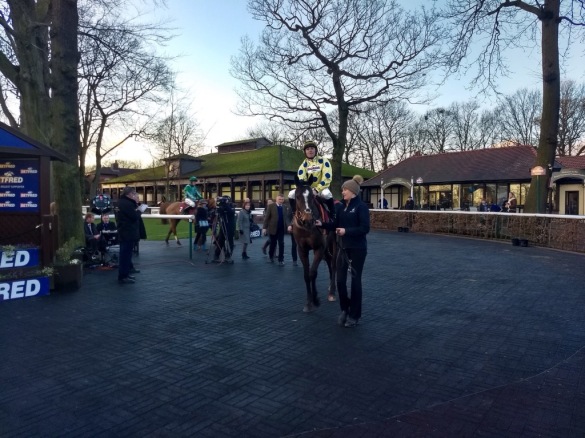 Cheltenham and Aintree will soon be upon us then and it’s possible that we might have seen a few potential horses to get involved with at the business end.

Review wise it might be a bit quiet here until Easter Saturday which is a fair few weeks unless anything else pops up, if it doesn’t then may I wish you all a very successful Cheltenham 😀

If it’s a Graded steeplechase over three miles at Wetherby then it can only mean one thing, back whatever Nigel Twiston-Davies sends up and that proved to be the casing point as Ballyoptic got his novice chasing career back on track with a dour display to bag the 3m Towton Novice Chase in gritty style on very testing ground as he fought back to over power long time pace setter Vintage Clouds.

A useful renewal on paper the race had a faller midway when the mare Pearl Royale took a tumble at the ninth after already skidding on landing at the fence before, up the straight at the business end Shades Of Midnight hit the front before running out of steam and getting overtaken by the class horses of the race, in the end Tom Bellamy was rewarded for persistence to land the odds, he holds entries in the Stayers and the RSA at Cheltenham but many Wetherby regulars will be curious to see if his trainer comes back here in November with Bristol De Mai and Blaklion for a triple assault on the Charlie Hall!

Vintage Clouds has plenty of experience over fences and reportedly has Aintree as his target and this run here off 140 will have done his chances no harm to get up the weights, he will probably come to Haydock in two weeks time for the big trial race for the National. 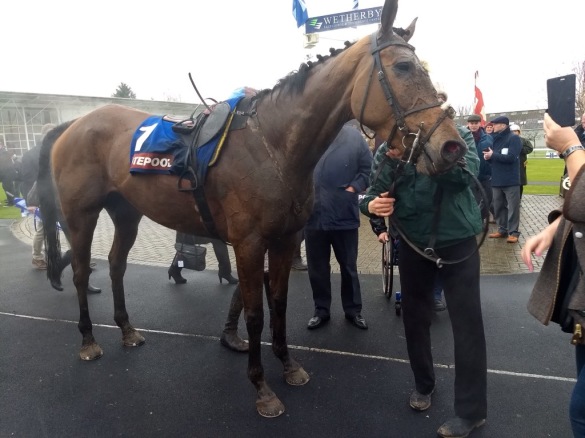 Elsewhere on a race day with a few small field races their weren’t many shocks it truth be told.

The first two races on the card had a similar pattern following them in that both were trained by lady trainers from flat racings head quarters of Newmarket.

Shambra easily landed the opening mares’ novice hurdle for trainer Lucy Wadham and Maxime Tissier (7), a winner on the flat at Carlisle in heavy ground off 65 last September she ran on readily enough and looks a progressive mare, wether she has a go at the Dawn Run is one thing but her flat mark will possibly be exploited in the summer too.

The other trainer was Amy Murphy whose continued good fortunes came with Mercian Prince who just got up to land the 2m4f Handicap Chase in a pulsating three way drive to the line, he didn’t handle the big greens of Aintree but came here off the back of a nice win at Kempton, The Byrne Group Plate has been touted by the trainer as a possibility.

Dan Skelton may have been out of luck in the big race but he left Yorkshire with a double on the day, first one came in the 2m5f Novice Hurdle with Robin Waters obliging like a 4/9f should, Harry Skelton put him in front at the last where he was always cantering and never came out of first gear, he will make a chaser next season but before that it’s possible he might have a pop up to Haydock for the Persian War before a crack at the three mile novice event at Cheltenham but he has a decent future.

Second up came Red Rising in the 3m Handicap Hurdle who also breezed home and might be aimed at the Challenger Final at Haydock on Easter Saturday next month, another progressive type who will be chasing next season.

Galway Jack repeated his win in the 3m Hunter Chase beating only one opponent in Auldthunder who was 64 lengths back, 13 now this win was merely a glorified racecourse gallop,even more so than Buveur D’Air at Sandown but connections picked up £2,370 and a few pennies after three of the five declared runners got pulled out which was a disappointment for the sport.

Last up came the bumper run in almost darkness and won nicely by Black Pirate from the James Ewart yard, a point winner over 2m4f in December he looks useful enough to make a fair jumper in time.

Some reasonable racing then but of course the main story of the weekend was the sad passing of Malcolm Jefferson one of the stalwarts of the northern jumping scene, he will be much missed and like everyone in this sport we send our condolences to all the family and wish his daughter Ruth all the best as she now flies the flag in Malton for the family name.