Middle of the road jumps horses had their day not quite in the sun on Easter Saturday at Haydock but more a chilly afternoon and probably for the first time in this neck of the woods at a jump meeting the rain relented and gave itself the day off for the finals of the 2017-18 Challenger Series.

For trainer Lucy Wadham she kept flag flying for Newmarket as the flat brigade were busy over in Meydan at some valuable flat meeting by landing the Staying Chase Final over 3m1f and a few yards extra with Potters Legend who showed no ill effects after his recent Fakenham tumble and roughed it out to go on and win by 11 lengths from Horatio Hornblower, Aidan Coleman got a good tune out of him and he could be ideal for a Becher Chase or Badger Ales next season.
The race also had one of the best displays of horsemanship seen on a racecourse for a long time when Barry Geraghty on favourite Behind Time made a complete horlicks at the ninth fence which caused him to lose the reigns and somehow he managed to wangle them back around despite the right hand side being under the horses neck and certainly brought back memories of Carl Llewellyn on Beau in the 2001 National, that error cost Behind Time all chance and he was eventually pulled up

Donald McCain landed a 1-2 in the 2m Hurdle with William Of Orange showing the benefits of his recent wind op by giving stablemate Chti Balko a 3.25 length beating, behind the pace under Lorcan Murtagh (5) he got the lead over the last and forged ahead to win, Donald McCain has a couple of Spring targets in his eye for him in the Chester Cup or the Swinton Hurdle in May. 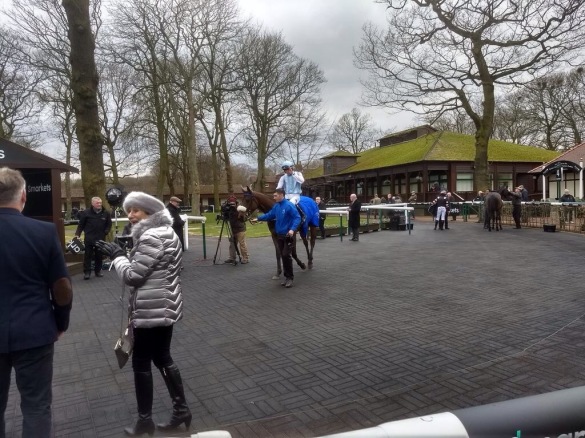 The opening race was the first part of a top and tail double for Ian Williams, Amber Gambler at the foot of the weights beat the top one Crievehill by a length, back after a short break since flopping at Doncaster he jumped pretty fluently and did it in a professional manner, he has form over further and that stamina helped him out a lot.

A stewards was called for into the Mares’ Hurdle final over 2m3f when they deemed eventual winner The Delray Munky had suffered interference off Lamanver Odyssey, it was very bumpy on the run in between the two and at first look watching the race it seemed like the claxon would be sounded which it duly did, already a winner of three Ayr hurdle races this season the connections from Iain Jardine may just be having a look at any potential races at the Ayr or Perth festivals in a few weeks time.

A pulsating finish in the Stayers Hurdle over 2m7f saw Culture De Sivola under Harry Cobden fend off Andrew Thornton on Head To The Stars, this was a race that was run at a solid pace but it was all about the closers to come on through the beaten horses to fight out the finish, following up from a Taunton win over 3m that could be it for the season for her and she will make a useful prospect next season should connections have a go down the staying division or go chasing.

Peter Bowen had the long drive back to Pembrokeshire seem a lot shorter following Rons Dream impressive jumping display in the 2m6f Mares’ Chase Final, runner up at Bangor last weekend over 3m she looked to appreciate the slight drop in trip and drew away from second placed Socksy very nicely, Rons Dream is a very likeable mare and can build on from this with connections hoping to get some black type into her no doubt.

Finally the Ian Williams second winner of the day came in the gruelling 3m4f Tim Molony Chase in Zerachiel who was one of only four finishers and picked up his first win of the campaign since landed a novice chase last season.

Next up here we head to Aintree for the first two days as usual of the Randox Health Grand National meeting, hopefully with some new things to improve our coverage!