Owner Ross Harmon would certainly have had more than a feeling that Safe Voyage would repeat his win of last years Betway Old Boston Handicap over 7f and thats exactly what his 6yo charge did as he duly obliged to kick off his season in fine style under Jason Hart.

Run in very wet conditions which resembled the sort of weather usually seen at Haydock Park’s winter fixtures he stayed on strongly off a much bigger mark than last year of 103, this was only his 17th career race and should offer more, lightly raced last season he could come back in two weeks for the Spring Trophy over 7f which will have a much smaller field, he is an out and out 7f horse but make no mistake his trainer John Quinn will have bigger things in mind for him

The other big race of the day came in the Betway Edge Green Handicap over 1m which had a very competitive look about it and it should throw up plenty of future winners.

This years renewal went the way of the Simon Crisford trained Mordin who hadn’t been spotted since being runner up in last season’s Cambridgeshire, he did have to work for this but picked up when he needed to, he will have even more bigger days this season in the good 1m-1m2f races and is a solid yardstick.

That win was the meat in the sandwich for a hat trick of wins for Pat Cosgrave who also landed a win for Godolphin in Div 1 of the 1m Novice Stakes for 3yo fillies on Search For Light who could more than useful on what was her first ever race and in the finale on the Richard Price trained Bristol Missile.

Finally Mick Channon looks to have a useful prospect on his hands with Severance who put up the most impressive performace of the day to take the 1m4f Novice event for 3yo, very keen early on he took the lead after the first half mile or so from which he galloped some useful sorts into submission, this colt by Nathaniel looks every inch a stayer in the making and could get slightly further in time, Make My Day chased him home albeit seven lenghts behind and can pick a race of this type up sooner rather than later

Tabassor, 3yo filly, she ran with promise in Div 1 of fhe 1m Novice Stakes for fillies which was arguably the better division and back in third on debut shaped as if she will have learnt plenty.

Knighted, 4yo gelding from Kevin Ryan’s didnt like the soft ground here but was a respectable fifth place, back on a sounder surface he can be winning soon.

Next up in two weeks time its the best of both codes as the first big race of the new jumps season comes up with the Swinton Hurdle plus on the flat the Spring Trophy, till then goodbye

The crowds came to Haydock Park for the final jump meeting of the season on an afternoon dubbed the “Greatest Show” and while Hugh Jackman didnt appear in the beautiful sunshine that gazed upon Haydock on Easter Saturday the owners, The Lesser Lights” had their own showman in Wayne Hutchinson who successfully steered thirteen race maiden Mahlermade home to break his duck and bag the Challenger Staying Chase final over 3m1f 125yds in the process.

A talented yet frustrating sort Mahlermade has always had a race of this nature in him and this afternoon he finally came good, only a 6yo he should have some more big days in him next season in some of those good quality long distance events, Quarenta back in second was travelling nicely but couldnt quite get his head in front.

Of the other races Cubswin just held on to land the 2m Hurdle Final holding off the fast finishing Arthington.

Taking this off 126 she has a very workable flat mark of 78 so expect to see her possibly back here for the Swinton in three weeks time and some useful middle distance handicaps on the level too before being aimed at those big two summer hurdles at Market Rasen and Galway.

Jonjo O’Neill Jr gave his father a nice payday too when Django Django duly obliged in the Staying Hurdle Final, last spotted when finishing down the field back here in January he had clearly been aimed for this as opposed to going for one of the big festivals and this 6yo looks a thorough stayer in the making and should be going chasing next season where he shoud make his presence felt in the staying division.

Another season of jumps comes to a close then with plenty of top races and stories told on and off the track, from here we now switch our attentions to the flat with a quick return back to Haydock on Saturday for the opening flat meeting in the North West.

Once again Irish eyes were smiling upon Aintree and at a time when most people would be getting their tea ready,jockey Davy Russell had a dream armchair ride on the enigmatic and egoless superstar that is the equine talent Tiger Roll to land back to back runnings of the most famous steeplechase in the whole world.

This was Gigginstown’s third win and boy do they like to do it with horses that have a style of their own, when Rule The World did it in 2016 he was a maiden over fences and Tiger Roll who is more of an expert over obstacles that are coloured green has that cult following which makes him popular in the game.

In the race he was always going well and travelling sweetly, despite making a slight error at the fourth last which didnt affect him that much,he moved away from runner up Magic Of Light with total ease like he knew he was the boss of this place to equal Manifesto, Reynoldstown, Abd-El-Kader,The Colonel and of course Red Rum to make it double Grand Nationals and now many are hoping that next year he comes back to equal Red Rum to make it three on the bounce.

Many horses who land this valuable race often struggle to win again but Tiger Roll now joins the likes of Pineau De Re and the much missed and much loved Many Clouds in winning after tasting Aintree glory and surely more visits to the number one spot will still be coming for this 9yo.

For trainer Gordon Eliiot this was his third win in the National and no doubt a few drinks or three will have been taken to toast the success of the Tiger.

Of the forty horses who set off, nineteen completed, seven came to grief with Up For Review sadly suffering a fatal injury at the first fence and the rest pulling up.

Back in second was the ultra consistent mare Magic Of Light and he held every chance until a mistake cost her a chance of glory but only an 8yo she should be back next year for another bash.

Rathvinden ran an honourable third and the best British trained horse came with Becher winner Walk In The Mill in fourth spot. 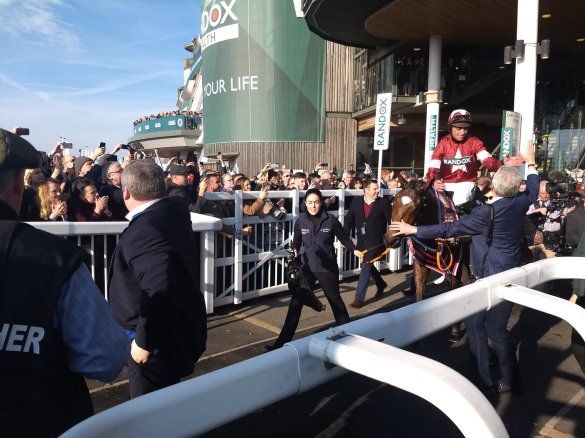 Thursday was a very cold,bleak and wet afternoon with rain pouring in, Aintree can get very rough when the weather turns and that day was no exception.

In the Betway Bowl, Willie Mullins and Ruby Walsh were in heaven as Kemboy followed the same routine as Tea For Two did in 2017 of falling at an early fence in the Gold Cup,have a potter around then gain redemption as he did when making all to land the Grade 1 Chase over 3m1f, he was always in command and travelled nicely, this gives Willie Mullins and Ireland their very own version of the Kauto Star V Denman problem with Al Boum Photo no doubt enjoying seeing his stable mate on the telly hoping both csn do battle in the Gold Cup next season.

ITV host Ed Chamberlin no doubt had memories of his old employers when the Jessica Harrington trained SupaSundae landed a pulsating and thrilling finish to the Aintree Hurdle as he just edged out Buveur D’air and Ch’tibello, Supasundae has been consistent without winning this season and although Buveur D’air had two wins he hasnt been at his best at all, getting caught in the fall of Melon didnt aid to his cause.

Over the big greens in the Foxhunters’ Chase we had a real emotional story that this place is all about with Top Wood rallying under Tabitha Worsley for trainer Kelly Morgan.

Back in 2017 Tabitha broke her back in a fall at Ludlow which resulted in a rebuild job so big that you would need to apply to the council for planning permission, after surgery most would think about putting their stirrups up but not Tabitha who came back and landed a win on the biggest stage of all. 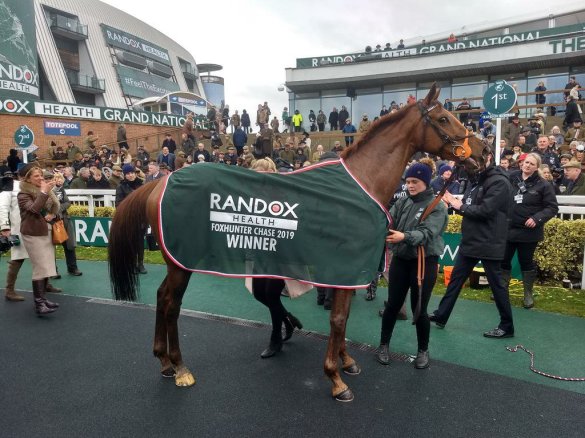 Ladies Day was a bit overcast but much more kinder no doubt for the many thousands of the Liverpool ladies who plan this day out with almost military planning.

On the track the days feature came in the Grade 1 JLT Chase otherwise known as the Melling over 2m4f and just like the previous day it was the Mullins and Walsh show as Min revered the form of last year by obliterating Politologue in a real routting by going from flag to wire with consummate ease, back over this trip he is looking far comfortable and no doubt all eyes will be aimed at the Ryanair next season with a possible final run at Punchestown looking likely. 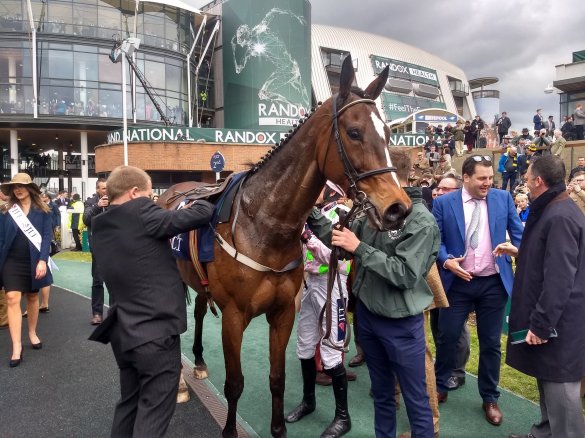 Colin Tizzard unveiled yet another quality staying chaser in Lostintranslation who looks a three miler now by landing the Mildmay Novices’ Chase, he did bag the Dipper at Cheltenham on New Years Day but relishes this test and could be a Gold Cup contender depending on how he goes on next season.

Cadmium landed another festival winner for Willie Mullins when easily taking the Topham Trophy over the National fences pretty stylishly, he jumped these nicely under Paul Townend and no doubt Willie Mullins will be making sure he meets the criteria for next season National as he could in with a chance of doing so. 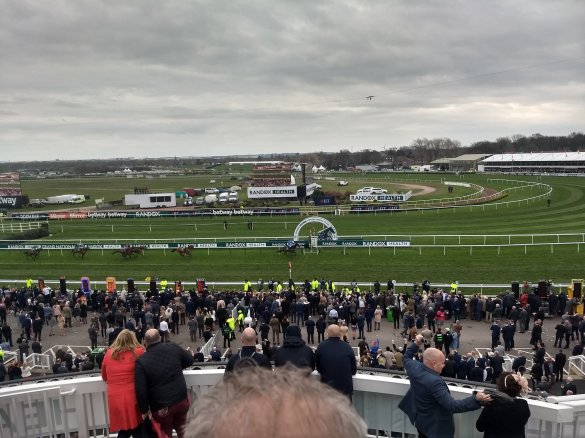 Finally Mark Walsh made the most of a spare ride from Barry Geraghty taking a tumble as he hacked up on the Nicky Henderson trained and JP McManus owned Champ who landed the Grade 1 Sefton Novice Hurdle very nicely, held up to get the three mile trip the potential in this horse has still yet to be untapped and he remains an exciting chasing prospect for next season.

Three days of pure emotional action at Aintree comes to a close, on the track the crowds bore witness to exciting sport and off the track the colour and the people of Liverpool once again showed that the love and passion for this sport remains at an all time high.