On an afternoon that resembled a near monsoon with many sane people on course wondering why they didnt stay in the warm comforts of home, those who did brave the elements on the most non summer Saturday afternoon of the flat season saw Safe Voyage rack up his third successive course and distance win as he landed the feature Group 3 John O’Gaunt Stakes over 7f.

Already unbeaten this season in a handicap and a listed race here, Safe Voyage faced arguably his toughest test so far but came through this examination with another A* as he travelled sweetly under Jason Hart and was fully in command as they hit the line.

Haydock regulars always build up a nice affinity with horses who reappear and Safe Voyage has got his place firmly cemented here making it four course wins from four starts, there isn’t much for him now apart from the Superior Mile in September which could be a target along with a possible go at the Sprint Cup should the ground be soft to heavy, failing that possibly a trip abroad for a stakes race over 7f will be sought after.

Suedois chased him home back in second spot which was a nice back to form run for him.

The battle of the Wills came out in Mr Haggis’ favour in the Group 3 1m4f Pinnacle Stakes as Klassique readily disposed of many peoples banker of the day, the Willie Mullins trained True Self as she bagged the Group 3 prize very easily.

In a race which looked pretty decent on paper all eyes were on the odds on favourite True Self and she travelled nicely under regular pilot Colin Keane but she didnt quite pick up when asked and struggled to quicken up in the heavy ground compared to Klassique who was away and in command under Danny Tudhope.

Hopefully she will make the trip back from Newmarket for next months Lancashire Oaks where she would hold an excellent chance of winning that particular race.

True Self lost nothing in defeat,she was simply beaten by a better horse on the day and will be back to winning ways soon. 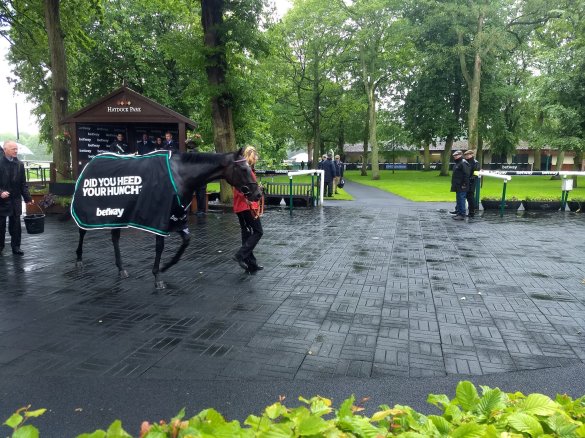 Preston based trainer Eric Alston has had plenty of useful horses over the years at Haydock Park and another one to add to the list came in the feature sprint race of the day in the Listed Achilles Stakes over 5f, lightly races for her age she picked up three races last season over 5f and 6f with the big win of those being a Class 2 Fillies Handicap at Pontefract, she loves to bowl along and got the run of the race here on the heavy ground under the steerage of Wigan born jockey Tom Eaves.

While this may not have been a strong race she has certainly added to her paddock value with some valuable black type and can find more as the season progresses, Eric would no doubt love to have her in September’s Sprint Cup, it’s just a case of how much more progressing will she do during the season, she does hold a Wokingham entry at the Royal meeting in the meantime

Back in second was the Karl Burke trained Lady In France, a 3yo filly having only her second start having won at Newcastle on her debut, she showed plenty of promise here and can improve from this.

Finally a couple of 3yo to keep onside in the trackers, first up Mind The Crack looks a good future staying type as he routed a small but select field in the 1m4f 3yo handicap, wearing the Paul and Clare Rooney colours and already gelded he made light of his opening mark of 83 and can kick on throught the ratings while in the 6f handicap for 3yo Came From The Dark came good on his handicap debut under Gerald Mosse.

Threesy Does It For Gosden

Six years since a first Oaks for John Gosden with Taghrooda followed up two years ago by the wondermare Enable and now Anapurna who continued her upward curve and unusual stat of having won all of her three races in the county of Surrey as she just got the edge over Pink Dogwood in a typical fight up the home straight on the rollercoaster track that is Epsom Downs.

A dual winner at Lingfield this year on the all weather and on the grass when she landed the Oaks Trial, Anapurna under the hands of Frankie Dettori had to use every ounce of fight in her to get the measure of Pink Dogwood and Ryan Moore to make it three Oaks wins for John Gosden and fifth one for Frankie in the roll of honour of this historic contest.

They went a reasonable gallop from the word go although the towards the end the closers in behind were making a bit of headway but fortunately the line came up in time, there was plenty of bumping and barging in the peleton behind the front pair which did bring an inquiry by the stewards which resulted in a few days holiday for some of the riders involved.

It looked an upto scratch version this year although with the first two separated by half a length and a blanket covering the four in behind who chased them home then its fairly possible the form could get reversed should a rematch at the Curragh next month between most of these come up.

Friday’s other feature Group One came in the Coronation Cup which brought a much deserved success not just to the owner,trainer and jockey but for fans who wanted this to happen so much as Defoe finally got that big win at the highest level as he ran on tennaciously to take the scalp of last years Leger winner Kew Gardens, last out of the gate he ran on stoutly under Andrea Atzeni to give trainer Roger Varian and himself two wins in this showpiece race.

Ascot for King George in July is reportedly the planned target as 1m4f is his best trip, being a gelding means he wont be eligible for the Arc so possibly something like the Woodbine International in Canada would be a more feasible race to go for and maybe a visit to Australia for “the race that stops the nation” could be stirring in the trainers mind?

Kew Gardens lost nothing in defeat but this is two second places in a row now for him, he clearly is suited by a bit further, his main aim will certainly be the King George too and the Irish Leger also looks ideal for him, Lah Ti Dar was very disappointing in behind and it would be no shock if she were to go back up north for the Lancashire Oaks in July to go for what could be a much easier race to get her confidence back.

Charlie Appleby has his string in good heart at the moment and of the two winners he had on the day one which stood out was Space Blues who won the Listed Surrey Stakes over 7f, tackling pattern company for the first time he looked up to the job and ran on nicely, plenty of options remain at Royal Ascot such as the Commonwealth Cup and the Jersey Stakes, he will stay a mile in due course and remains a nice prospect.

The Godolphin Blue also got on the board in the opening Woodcote Stakes for 2yo over the 6f trip as Pinatubo took the spoils in the style of a good horse, following up from his debut win at Wolverhampton he is bred to get much further in the future, given fair quotes for the Coventry Stakes at Royal Ascot which could be next but that race might not suit him with both wins so far being on turning tracks, he is one to keep an eye on.

Coming up this Saturday we head to Haydock for the John O’Gaunt Stakes, till then goodbye.