A gorgeous sunny afternoon here at Haydock,so warm that before racing I purchased a new Panama hat to make up for the one that got swiped from my head last year when being passed by a minibus full of ejits who don’t deserve to be allowed on a racecourse and really should know to behave in modern society.

Anyway rant over,today saw the 216th running of what is one of Haydocks signature flat handicaps of the season and always a useful contest to watch with traditionally big fields over the tricky 1m4f course here at Haydock.
Below a collection of some of the various Old Newton Cups. 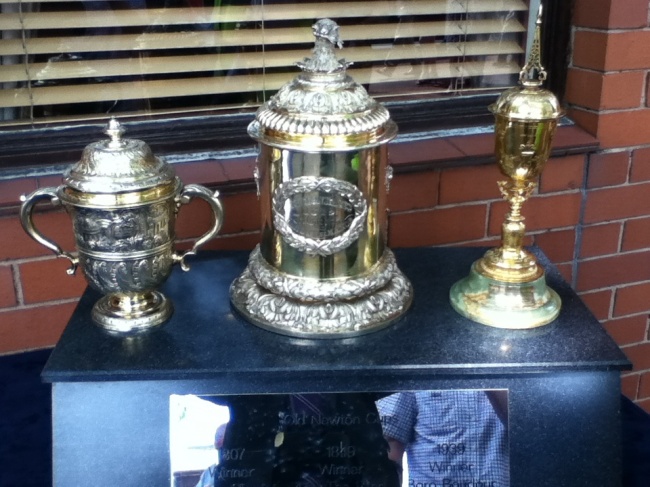 Today was also featuring the Lancashire Oaks which is now a Group Two race and this race has been run at Haydock since its inception in 1978 apart from the 2007 running which was run at Newmarket by Turbo Linn after Haydock was waterlogged.
Seven races on the card for the huge crowd here today who were welcomed by the Haydock Band who were knocking a few tunes out to entertain racegoers as they made there way in.
Below the Haydock Band. 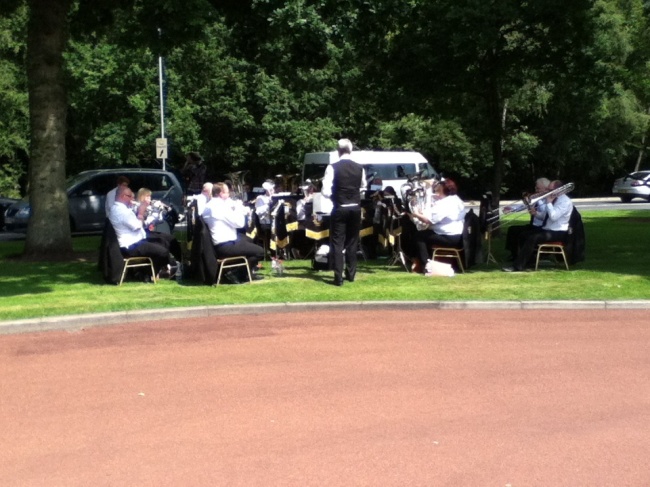 1.45 The Casino at bet365.com Handicap Stakes,5f,3yo 66-85
Only six went to post in what was a very competitive handicap and the victory went to Smart Daisy K who led in the last half furlong to record a 1.75 length win from Holley Shiftwell in second and Dusty Storm in third.
This looked a useful race and expect some winners to come out of it as it has the look of a race that will throw up future winners during the season.
2.20 The bet365.com Conditions Stakes,6f,3yo+
Just the six in what was a real mixed bag of horses,most of the field looked out of form and in need of a confidence boost to kick start their 2013 campaign.
It was a strong drive from Kieren Fallon which got Louis the Pious up on the line to deny Masamah who made almost of all the running by a short head after a photo finish which the judge sorted out.
The finish was a bit reminiscent of the 2012 National in that the winner only led once in the race and that was bang on the line.
Hard to know what to make of this contest to be honest so the form should be treated with caution but the winner deserved his day in the sun and this is probably about his level.
2.55 The bet365 Lancashire Oaks,1m4f,3yo+,Group 2
An ok but not high quality renewal of this years running of the Lancashire Oaks, the bookies had priced up unlucky Royal Ascot runner Albasharah as the favourite.
It turned out to be a bookies benefit as 20-1 shot Emirates Queen won for trainer Luca Cumani who normally does better in the Lancashire Oaks to hold off Pinnacle Stakes winner Moment in Time in second by 0.75 lengths with Albasharah in third.
Wannbe Loved made most of the running before fading in the last furlong while the only 3yo in the contest Banoffee struggled at the business end but maybe back in 3yo company she could do better although it really is hard to see where her next win will come from.
Albasharah ran a lot better than her run at Royal Ascot as today she was able to run her true race with no blockages but I think a return to 1m2f will suit her much better and its quite possible the Nassau at Goodwood could be on the cards.
3.30 The bet365.com Old Newton Cup,1m4f,4yo+
The full declared field of 17 set off in this years renewal and it looked fairly wide open on paper and it was a raid by Yorkshire as the Mark Johnston trained Star Lahib stayed on to get the better of Tepmokea by 0.75 lengths with Fennel Bay in third spot.
The favourite for this was recent Royal Ascot winner Opinion who was staying on at the end in fifth which he dead heated with Franciscan the recent Cumberland Plate runner up,Opinion could well be Ebor bound and he looks like he wants a bit further while Franciscan was being pushed along after halfway.
Star Lahib is a tough filly and no doubt she will be aimed at getting some black type before the seasons out and she should be capable of that while Tepmokea runs to a consistent level but at 7 won’t be improving that much I’d think.
4.05 The Mobile Bet at bet365.com Nursery,7f,2yo
The second nursery of the season which went to Culdaff who justified favouritism who beat Lily Rules by 1 length with top weight Tanseeb in third.
As this was a nursery its hard to equate the form and value of this race, These aren’t the best two year olds around I think but they are also not the worst, time will tell as the season develops.
4.40 The bet365 Handicap Stakes,7f,3yo+,86-105
A good high quality handicap here with the the 3yo Ashaadd regaining the winning thread back over 7f which is his best trip being as he didn’t stay 1m on his previous run but went in here of a rating of 95 so now a step up to pattern company will be expected and trainer Roger Varian carrying on from his much missed old boss Michael Jarvis in having good quality winners at Haydock.
Mabbait ran a seasons best in second but this 7yo has not won since 2010 while May’s Silver Bowl winner Shebebi ran a lot better than when in the Britannia at Royal Ascot and has still got more improvement in him.
Below Ashaadd having a well earned drink 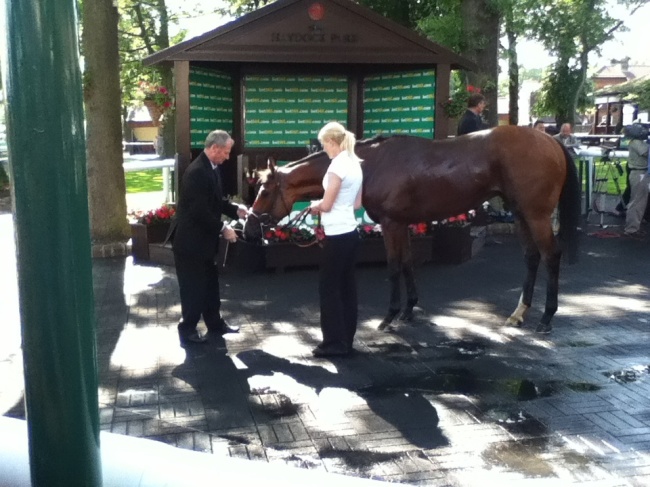 5.15 The bet365.com Handicap Stakes,1m2f,81-100
Only three went to post for this race which had £12660 to the winner (I won’t moan about people who moan about prize money)
Broughton made the running before getting overtaken by eventual winner Red Avenger at the 2f marker who went on to score by 3 lengths while Grandorio brought up the rear and showed that his recent 12lb rise after winning at York was probably a bit harsh.
Red Avenger found this much easier than his recent runs in the Silver Bowl here and in the Britannia at Royal Ascot, small fields suit him and he benefitted going up in trip which may be the making of him.
Two good days of racing then which saw some good racing and decent crowds benefitting from the sun which always brings the crowds out.
Next up for me is a two day Yorkshire tour taking in Friday evening racing at Pontefract and Saturday afternoon at Ripon then after that its off to the Olympic Stadium for the Para Athletics.