A day of sporting pleasure for fans in and around Manchester today with something for everyone on all budgets to indulge themselves in on a nice autumn day which began warm but slowly got a bit chilly come tea time.

Today was a real mix with Premiership football at the blue half of the City while down at The Theatre of Dreams it was the Super League Grand Final between Wigan and Warrington while local clubs Altrincham,Droylsden,Stockport,Bury and Abbey Hey were all in action.

After much deliberation I decided to get the tram across to Droylsden for the visit of Matlock Town,I did originally plan on getting the train to Atherton but I missed my train as I was helping a student lady who was in Manchester for a gig and was lost looking for the venue so I happily helped her to her destination and waited until her friend turned up so she was not waiting on her own in a place she knew nothing about,Always important to help someone and do a good turn.

At the start of play the home side were stuck at the bottom of the table with just two points off their first eleven matches while Matlock were in tenth and in a respectable position.

Matlock are known as The Gladiators,quick research into this shows no reason by why although the town is more well known among fans of Peak Practice as some scenes were filmed their and some well known Matlockers,Matlockonians (i dont know what people from Matlock are called!) include former Blue Peter host Simon Groom and fans of Peep Show will know the name of comedian Isy Suttie who also hails from the Derbyshire town also the HQ of the Youth Hostel Association is in the town too!.

The three points went quite comfortably to the away side from Derbyshire here who were always in command and look like they will be in the hunt for promotion come the business end of the season.

In the first half they set their stall out early with some good movement of play from Matlock winger Lavell White getting some good runs into the box only finding the Bloods keeper Daniel Tabener the irremovable object who kept to the philosophy of thou shalt not pass saving some good shots and being a good presence between the sticks.

The main striker and top scorer Matlock’s Darryl Thomas finally broke the deadlock on 21 minutes when converting a penalty after a shoulder charge from the Droylsden defence.

Droylsden struggled to threaten after that with their best chance coming from Dylan Moloney who shot from outside the box after half and hour but the power was poor and Matlock goalie Jon Kennedy had a simple save to do.

Matlock had more chances but they simply could not find a way through in open play and should have been at least four up as half time came.

Second half commenced after a fair cup of tea and really average hot dog (think I shall stick the pies next time) and a tough day for striker Darryl Thomas continued,it’s fiat to say he was suffering from B.D.S. or Barn Door Syndrome to give it it’s full title as he had chances aplenty but could not get them Inbetween the posts during open play but took advantage from another penalty on 49 minutes after a pass through to Danny Holland brought about a foul which was easily converted by Thomas.

The home side made a couple of changed and this brought the Droylsden goal from Dylan Moloney on 63 minutes as a lovely through ball from captain Adnan Ahmed sent him into the box where he went past the defence and rounded keeper Jon Kennedy to slot home and was this the sign of a comeback worthy of Lazarus?

The answer was a resounding no as Matlock came back from that blip as substitute Corey Gregory who replaced Thomas scored on his first attempt on goal after slotting home an easy chance to make it 3-1 to Matlock then in injury time Danny Holland made it a 4-1 win after breaking Droylsden’s offside trap to simply pass through the keeper to collect the points for the Gladiators.

A fair game of football,Matlock deserved the three points and move up to sixth in the league on twenty point along with five other clubs so this could be a tight division this season.

Droylsden are struggling but they keep battling on and keep fighting but they are going to be in for an even tougher season as the weeks progress,the place is a nice one to watch non league football and it has a lovely clubhouse with some nicely priced food and drink for the fans to tuck into.

Below,Quite unfortunate which letters fell off! 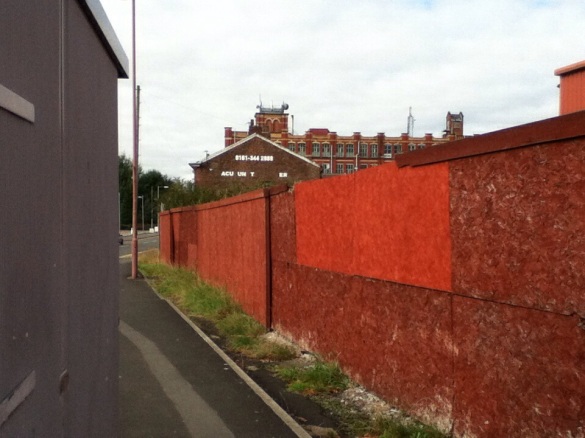 The Matlock Massive make the noise! 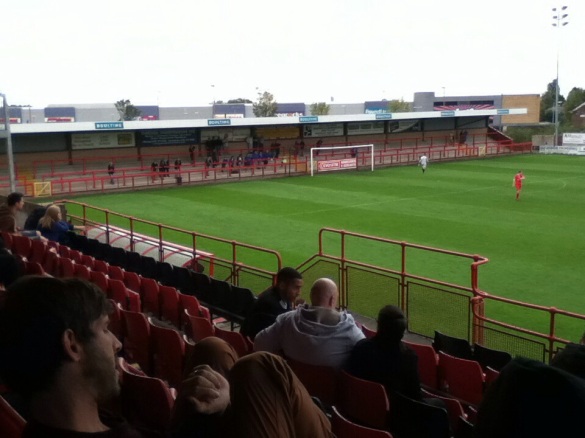