Derby Day on Town Moor at the home of the fifth and final classic of the season the St Leger.

A reasonable crowd came out to an afternoon that began with rain and drizzle and ended with the sun making an appearance later in the day.

A 16-1 surprise in the opener as Assault On Rome made all for Adrian Nicholls and Mark Johnston, tailed off last on her debut at Newmarket she improved and despite being a bit green still,she edged to her left in the last furlong and just held on from the fast finishing Godolphin debutant Turning Times, Liberty Sky another debutant from the yard of Richard Fahey will have learnt from this race.

Hard to know what to make of the winning filly,she is bred well and could be anything.

Run over the full course and distance of the St Leger this was a poor staying contest.

Old warrior Colinca’s Lad took them along and was going great guns until Robert Winston on Precision Strike came up smoothly in the last furlong and comfortably took the win by 2.75 lengths.

The well fancied Duke Of Yorkshire ran no sort of race and was never happy,he doesn’t seem in love with the game at the moment.

Precision Strike did win a couple on the sand this year so was fully entitled to take this,there is a race over 2m at Newcastle on the first day of the Plate Festival which could be the next race for him.

Below,At the start for race two.

A fair handicap which went to the Paul Midgley trained Linguine under Paul Mulrennan he had the 8yo Tepmokea for company all the way until the race came to the business end where he found an extra two lengths which was all he needed, the inform One Pursuit kept on in third and despite Jenny Powell taking seven pounds off,the handicapper might just of got him although he could be turned out again.

Linguine stays further than 1m4f so it’s possible a return to staying trips will be next.

A tight and fascinating looking contest on paper with three year olds that might have been a shade below the Derby quality but still more than useful in their own right.

As expected Fire Fighting took them along from the gate with Gold Trail for company, coming down the straight Fire Fighting was headed and overtaken as Roseburg took the lead with two furlongs out and had a real fight on his hands as the favourite Satellite made his move,however he hung to his left and had to be switched by Shane Kelly and got denied by a short head by Roseburg who took the prize.

Roseburg trained by Luca Cumani is going in the right direction and although he did wander a bit he is clearly useful, Satellite seems to have a mind of his own and the hold up tactics looked to be ideal today.

Gold Trail in third could be better being dropped down to 1m.

Racing resumed after the hours break for the big race from Epsom.

A very useful winner for the Normandie Stud as the John Gosden trained and Nicky Mackay ridden Wannabe Yours gave a nine length thrashing to Braidley in the style of a more than useful performer.

Plenty to like about this winner, the owners for my regular readers will know the Normandie Stud had last weeks Pinnacle Stakes winner at Haydock and no doubt the next target for this horse will be to get some Black Type as he should be going up in grade after this unless he goes for the Britannia at Royal Ascot.

Braidley ran a lot better than his recent run in the Silver Bowl at Haydock,he is in good heart,possibly a step up to 1m2f may be ideal.

The big disappointment was from top weight Lat Hawill, he won his maiden at Newcastle back in October first time out as a 2yo, beginning this season he was fourth behind Kingman in the Greenham before coming last in the French 2000 Guineas, He clearly should be better,it’s possible he’s more of an autumn horse.

Below,Wannabe Yours after his win. 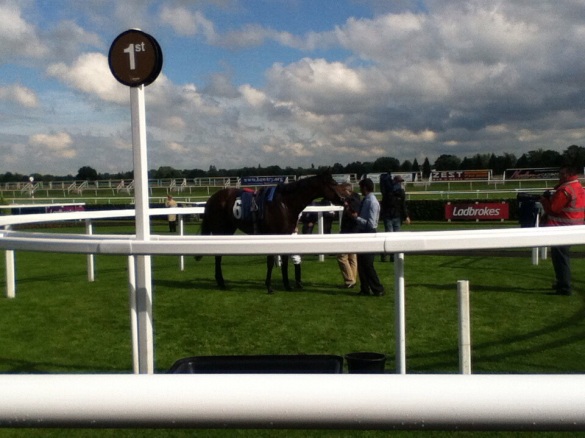 Most of the field came into this race out of form so it was no shock to see the bottom weight 4yo Red Refraction take this although he did have a real fight to the line as Sir Reginald under Oaks winning jockey Paul Hanagan finished with a wet sail and would have won had this been over an extra half furlong.

Red Refraction came here off the back of a recent win at Goodwood,he is a solid and consistent sort this season although he was really lucky here.

Sir Reginald has a win in him somewhere,it’s just hard to know when that will be.

Not a strong contest and 11-10f favourite War Spirit under Sean Levey jumped out and made all,rated 71 he will be of interest when he goes back handicapping and 5f for the moment looks to suit him better than 6f.

The eye catcher looked to be Koala Bear from the James Fanshawe base in Newmarket,this 4yo filly was having only her third start and kept on well in third, now qualified.

A pleasant afternoon on the Town Moor,the weather was poor to start but thankfully it brightened up as the day progressed.

Derby wise Australia did exactly as his mummy and daddy would have expected, it would be no surprise should he race two or three more times before being packed off to stud duties at stud.

As for me the next event planned is the Sunday of the British Athletics Championships in Birmingham,before that a nice earned rest.been racing on the go since April so I’m due a break to recharge for the busy summer.

Till then,enjoy the likes of the World Cup,Royal Ascot,Wimbledon,Commonwealth Games and of course in Yorkshire the Grande Depart.